To celebrate the 30 years of one of the most influential live-action films Batman Returns 1992, we are teasing a special look at the incredible Prime 1 Studio X Blitzway collaboration project!
This is just a sneak peek… please stay tuned for more teasers in the days to come! 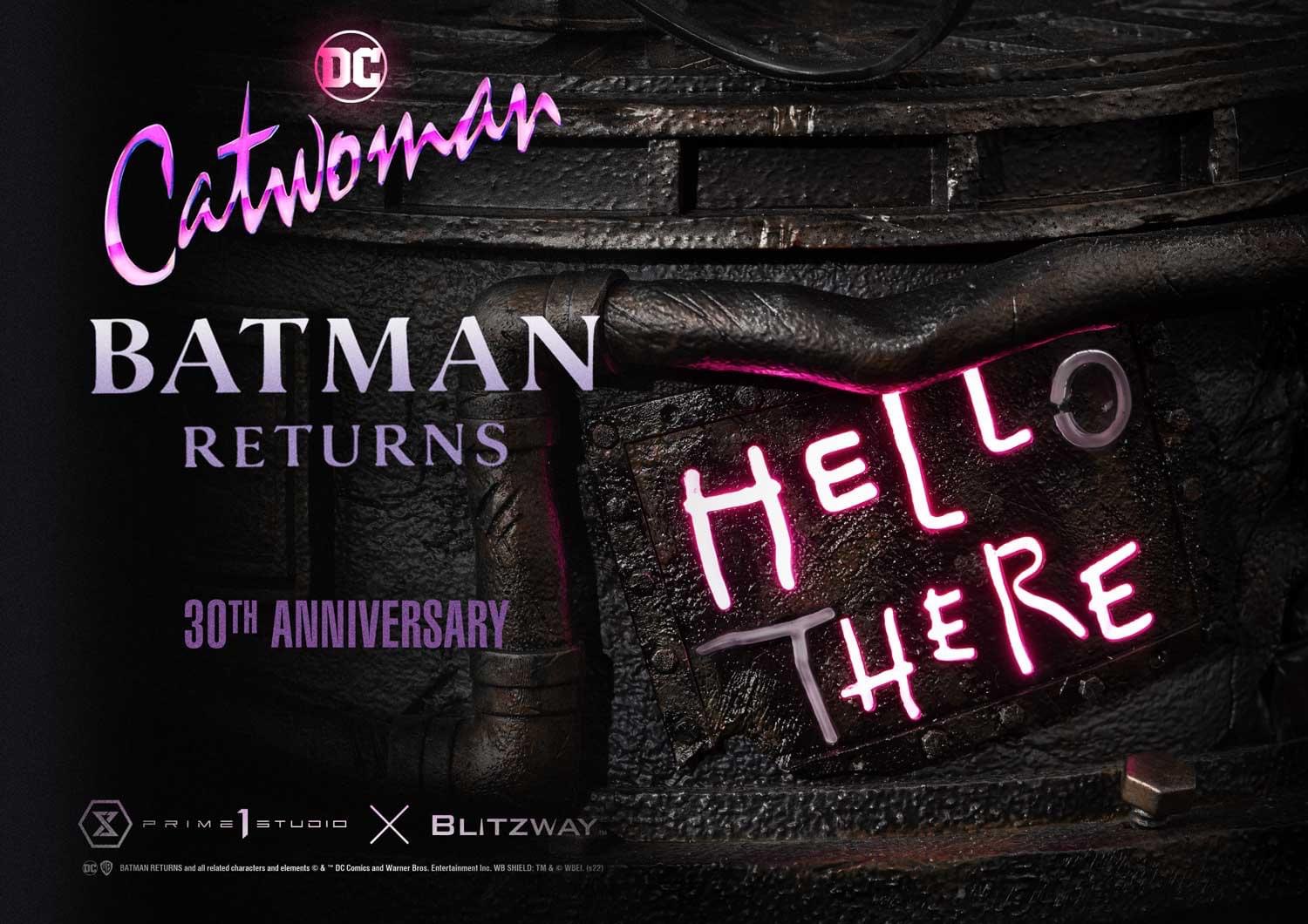 wow! Wonder if KA Kim is doing the portrait here too?

Hope this means they'll be doing a Keaton Batman.

Gipetto0812 said:
wow! Wonder if KA Kim is doing the portrait here too?

Hope this means they'll be doing a Keaton Batman.

Guess since they couldn't do 1989 Batman they waited on the right moment to do Returns
Click to expand...

They should go all in on this line with batman and penguin too, could look epic all together 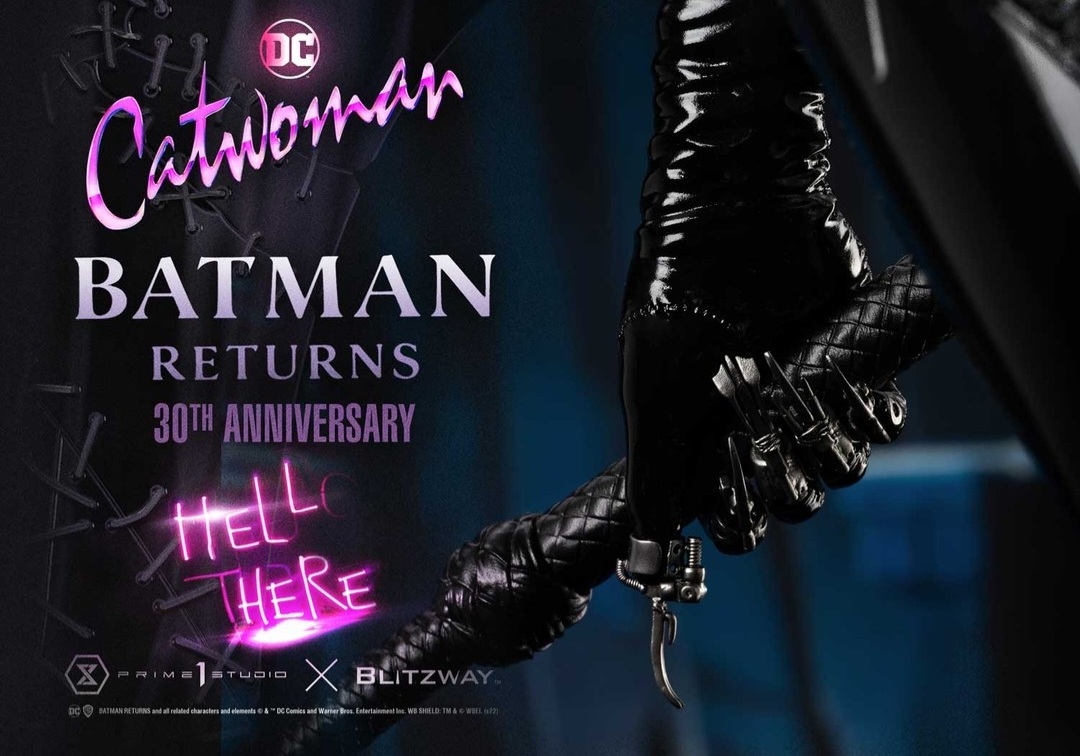 I hope that hello there sign is on the front as I hate when companies put things like that on the back - who is going to display that 99% of the time?
X

Damn, this is going to be amazing! Poor Darkside Collectibles took way too long to come of the gate with theirs lol but competition is a good thing

xAgentofChaosx said:
Poor Darkside Collectibles took way too long to come of the gate with theirs
Click to expand...

xAgentofChaosx said:
Damn, this is going to be amazing! Poor Darkside Collectibles took way too long to come of the gate with theirs lol but competition is a good thing
Click to expand...

DarkSide's will be both 1/4 and 1/3, so there's going to be direct competition no matter what scale this is going to be at.

If so, it would be Blitzway's first half scale piece. 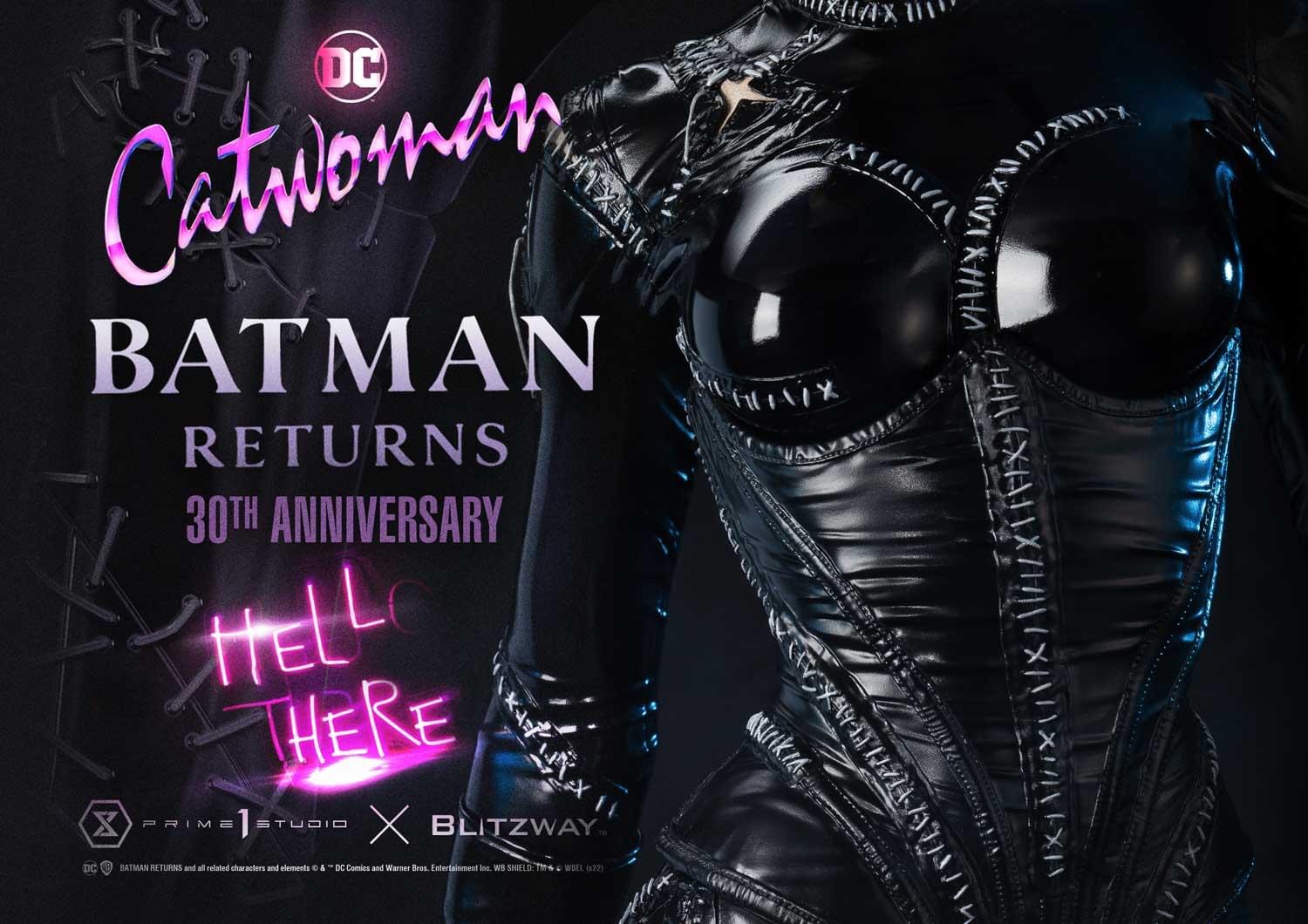 Someone posted a pic of the head sculpt over at statue forum...... 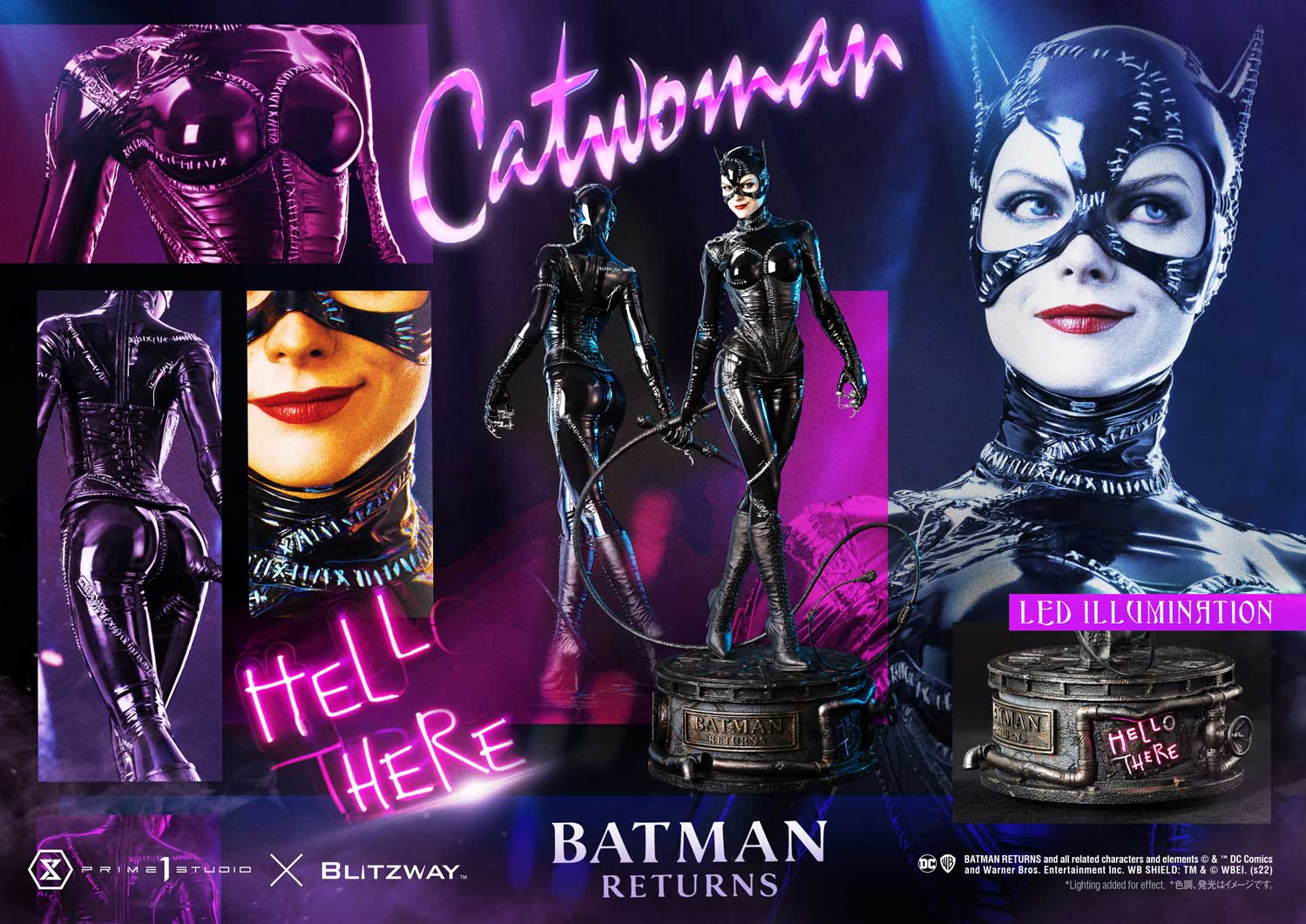 No crazy unmasked sculpt is a missed opportunity. She should have three heads. 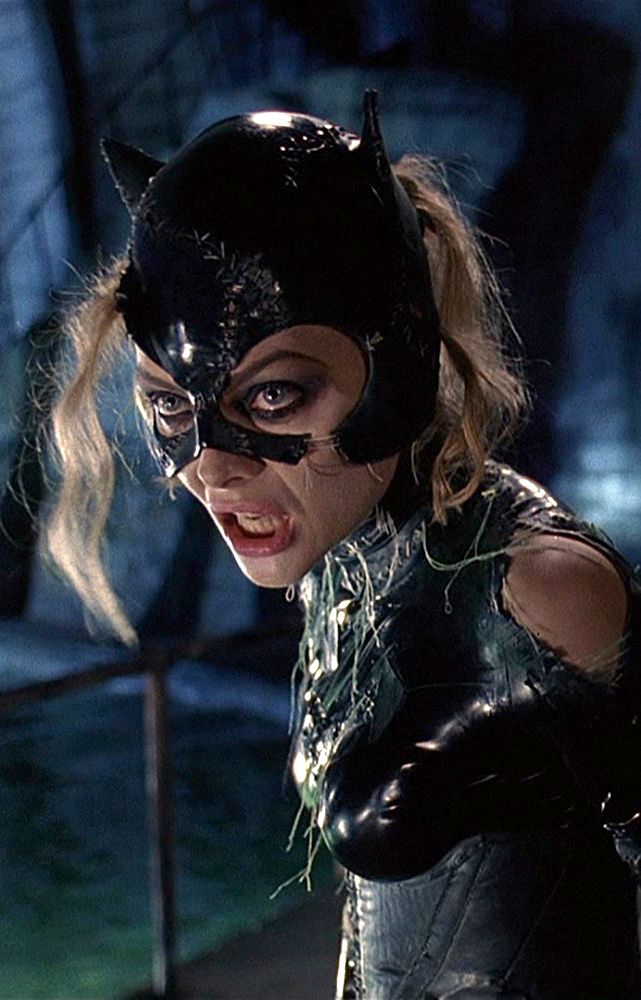 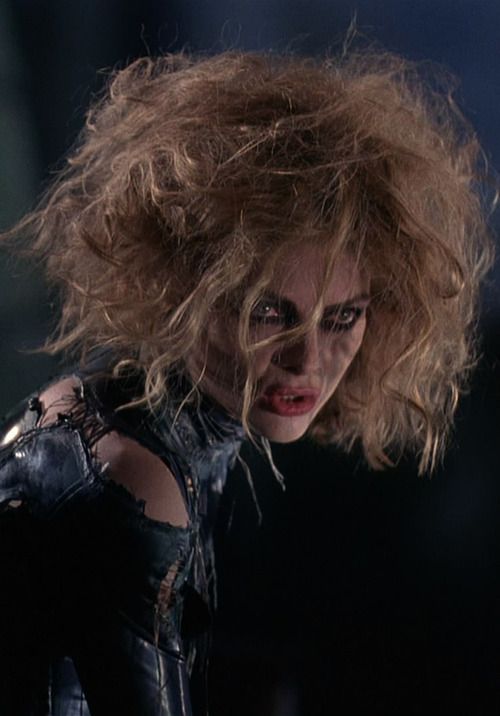 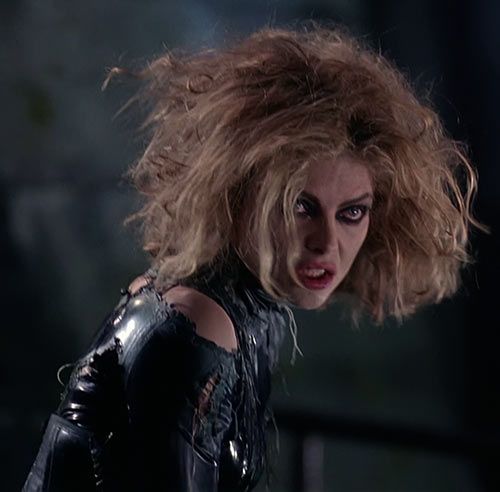 "You’re the second man who killed me this week, but I’ve got seven lives left.”

Catwoman to Batman Prime 1 Studio is incredibly proud to present a phenomenal collaboration with Blitzway, and a long-awaited addition to the Museum Masterline Series: The 1:3 Scale MMBM-05S Catwoman (Michelle Pfeiffer) Bonus Version from Batman Returns

Prime 1 Studio and Blitzway have surpassed all expectations and have delivered the most stunningly accurate depiction of Michelle Pfeiffer’s Catwoman from 1992’s Batman Returns!

Catwoman is one of the most iconic villains in Batman’s Rogue’s Gallery. And the film’s interpretation is the most famous version of her! Clad in skin-tight latex, and armed with a devastating bullwhip, Michelle Pfeiffer’s Catwoman was irresistible to Batman, and all of her fans!

Prime 1 Studio and Blitzway have achieved the incredible: this screen-accurate depiction of Catwoman is quite a sight to behold. From top to bottom, this interpretation of Catwoman id picture perfect: from her white-stitched, glossy latex cat suit, to her beautiful, subtle smile, to her unassumingly dangerous pose...this Catwoman is the one to own!

Blitzway did an amazing job of creating a playful but perilous look on Catwoman’s face. A quick glance would make one mistake this statue for the actress herself! Seductively beautiful all around, this almost 30-inch tall statue is a feast for the eyes. The various textures, and finishes of this statue can only contribute to the breathtaking realism of the piece.

Hands down, this statue is an instant classic! Catwoman playfully steps across a Gotham City-inspired manhole/street-themed base, featuring an LED Illuminated greeting playfully saying “HELLO THERE”.

And when you Pre-order this Bonus Version from our official online store or any authorized distributor will you receive a cool, extra Bonus Part: you will receive a Miss Kitty figure that you can place on the base next to Selina! If you are a huge fan of Batman Returns, of Catwoman, or of Michelle Pfeiffer, you owe it to yourself to Pre-order this MMBM-05S Catwoman from Batman Returns immediately before it sells out! 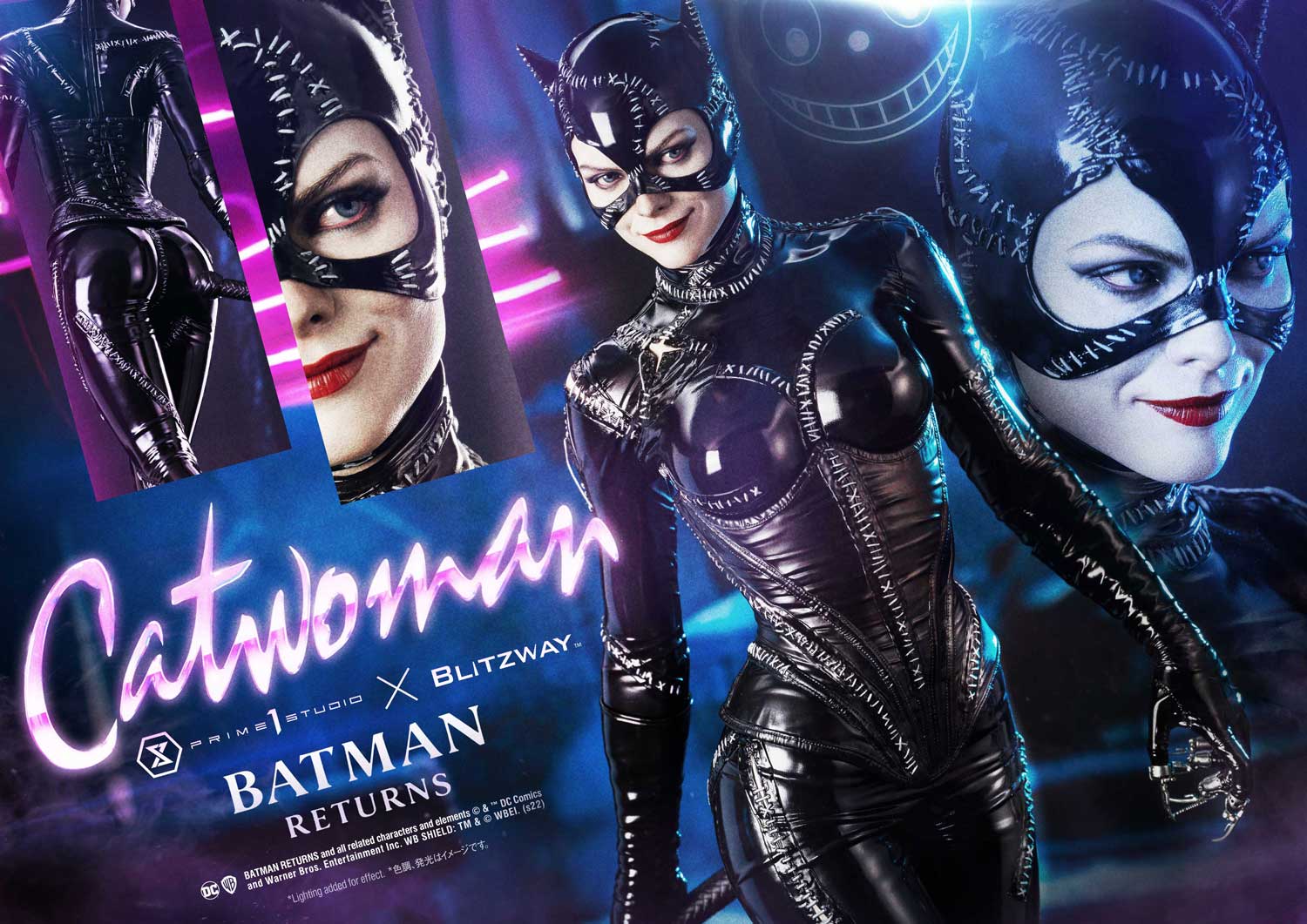 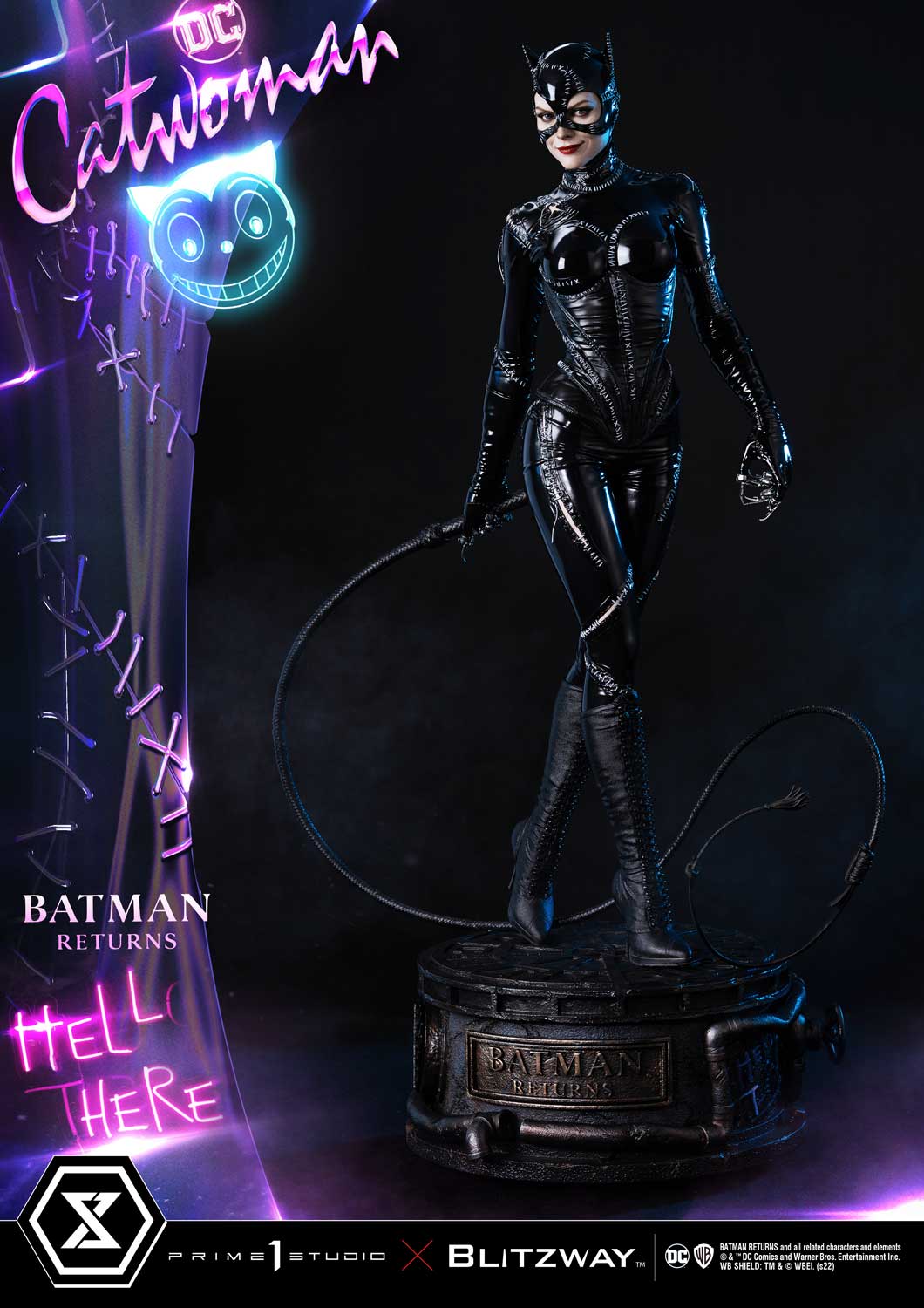 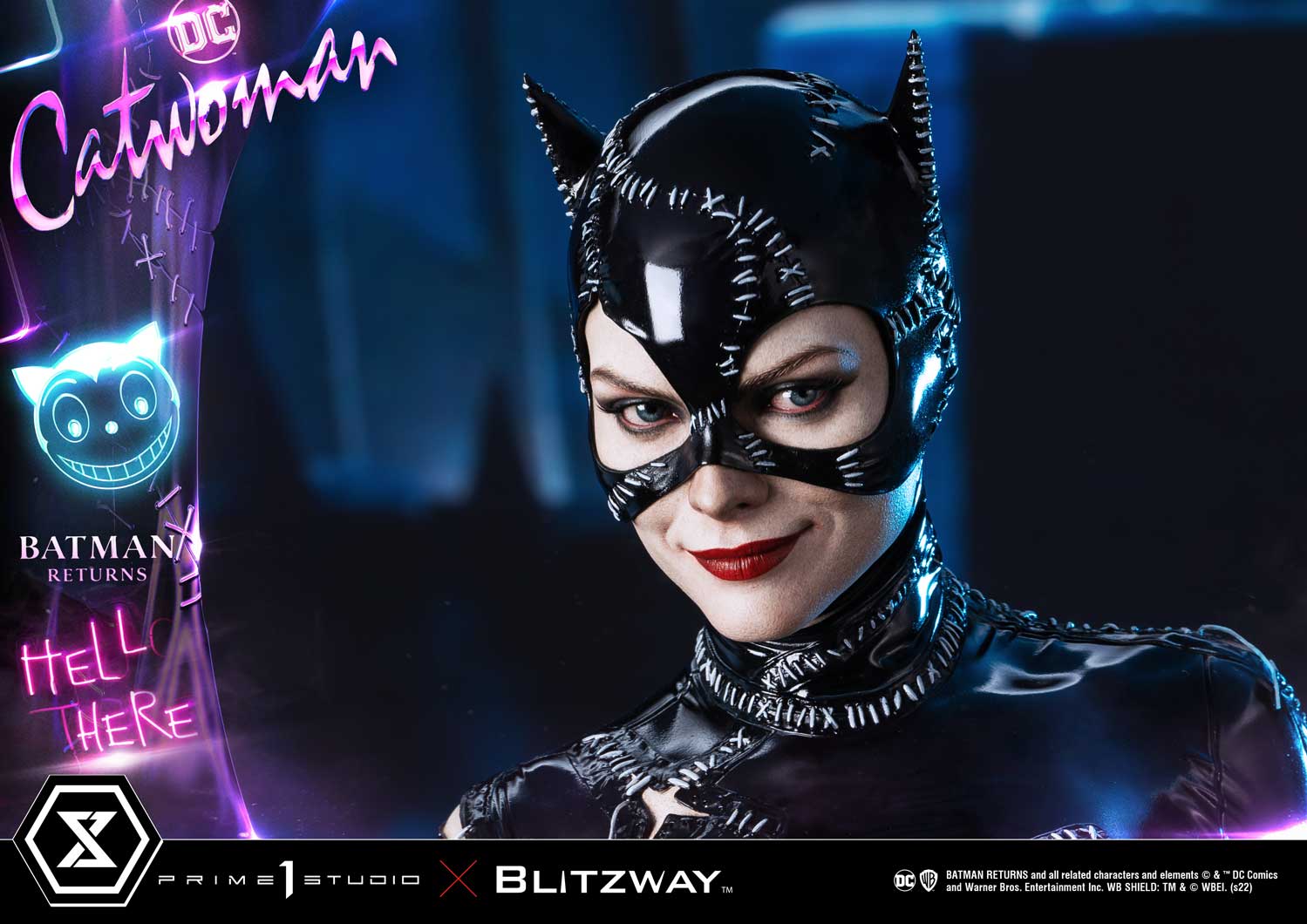 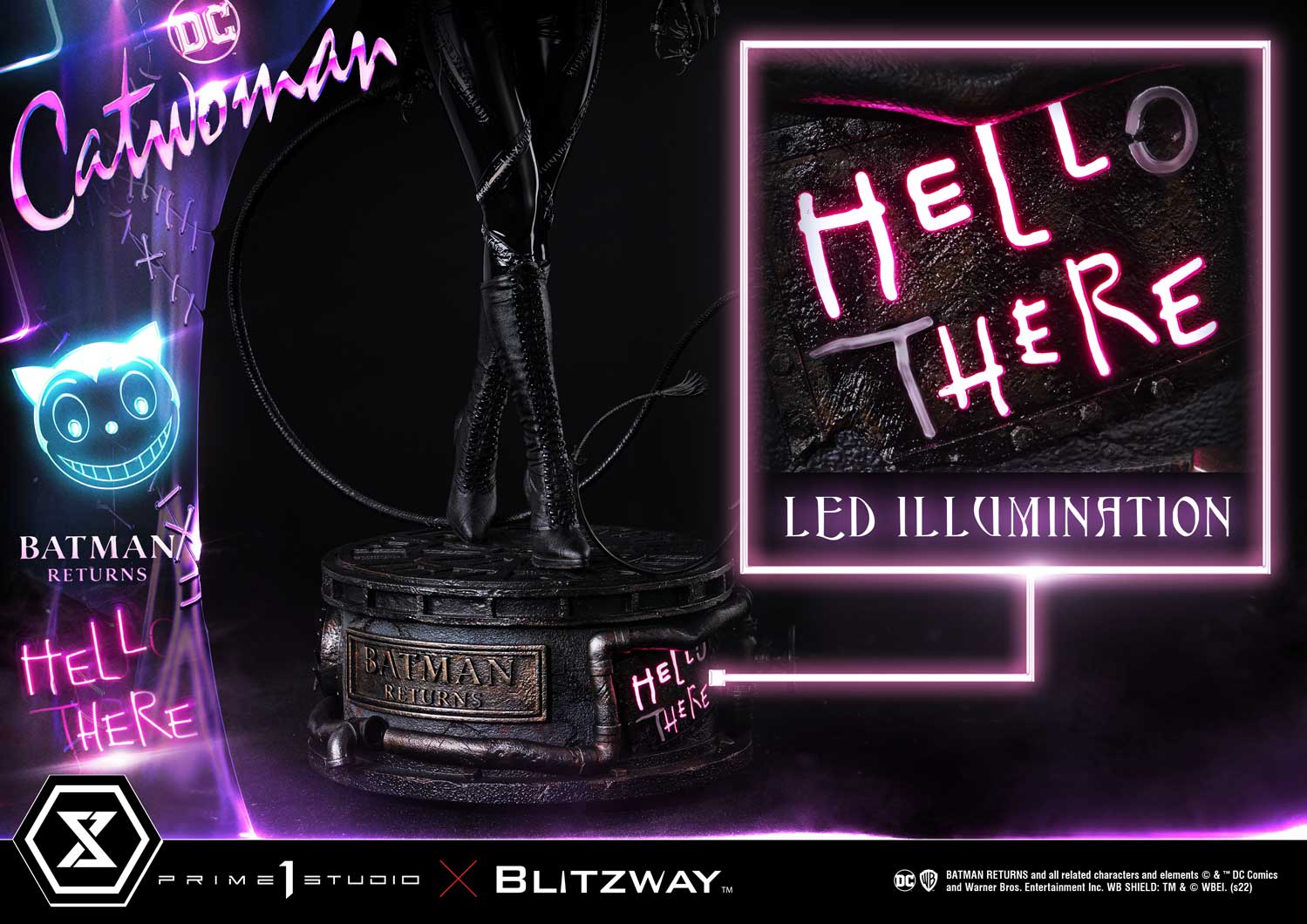 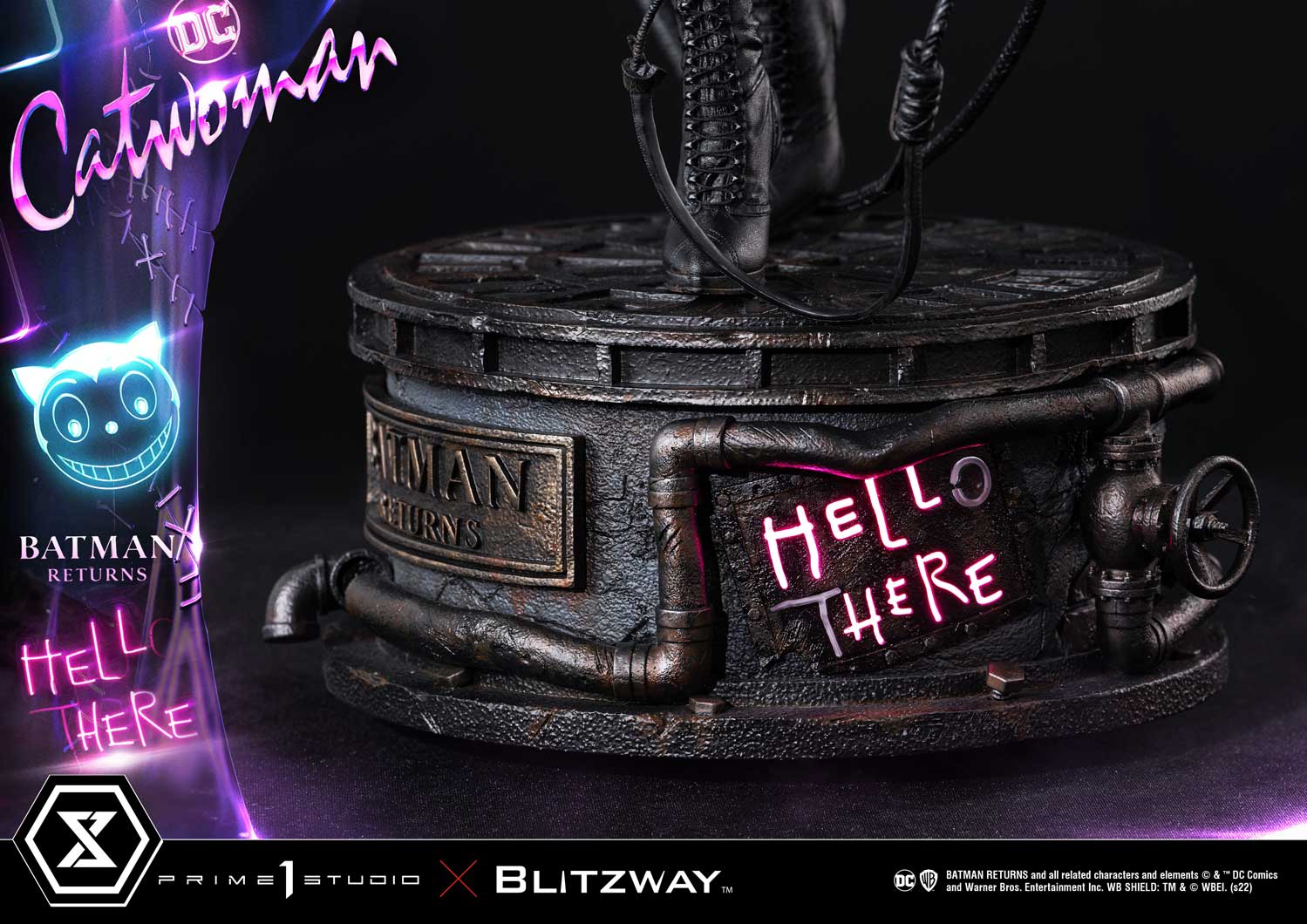 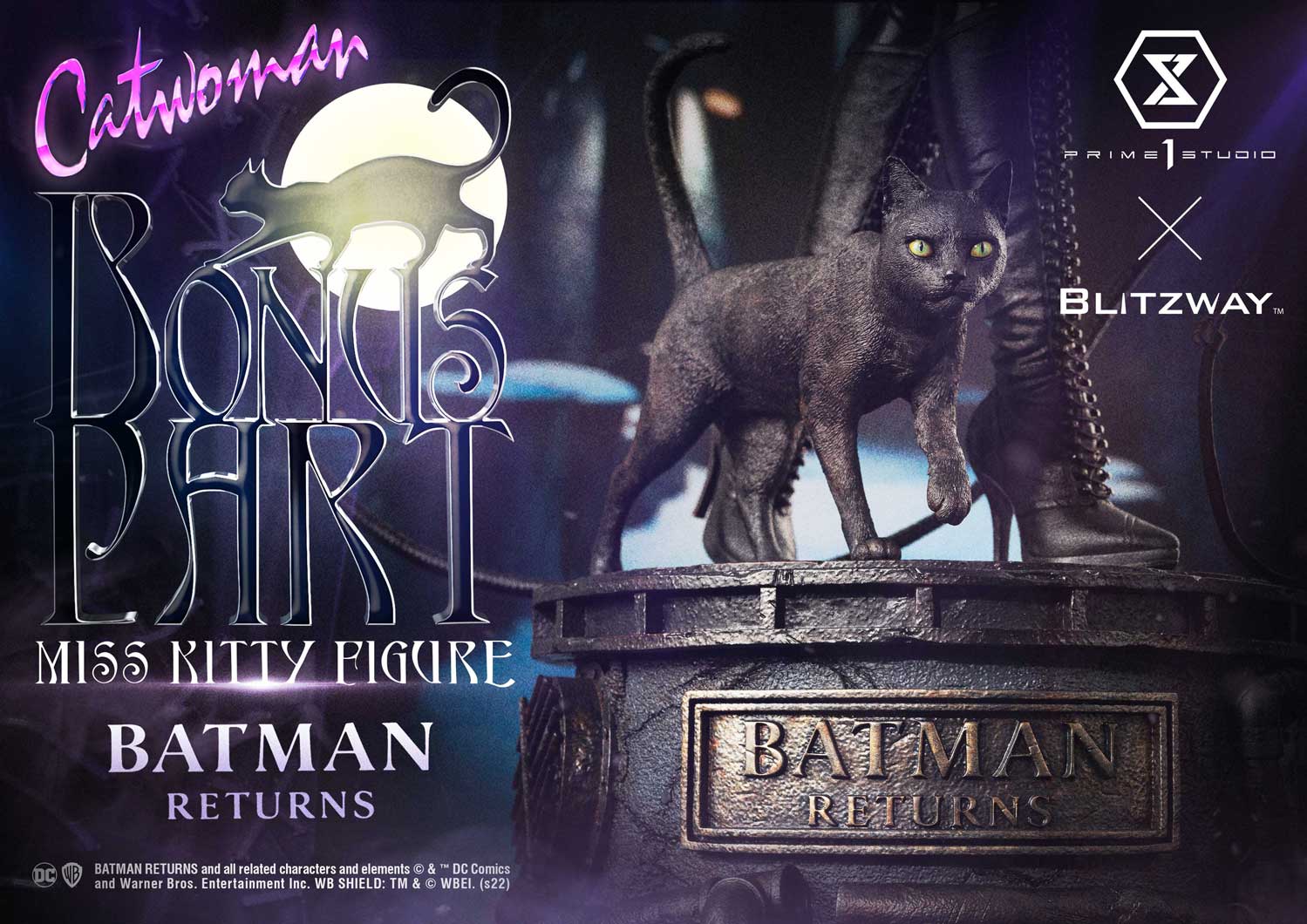 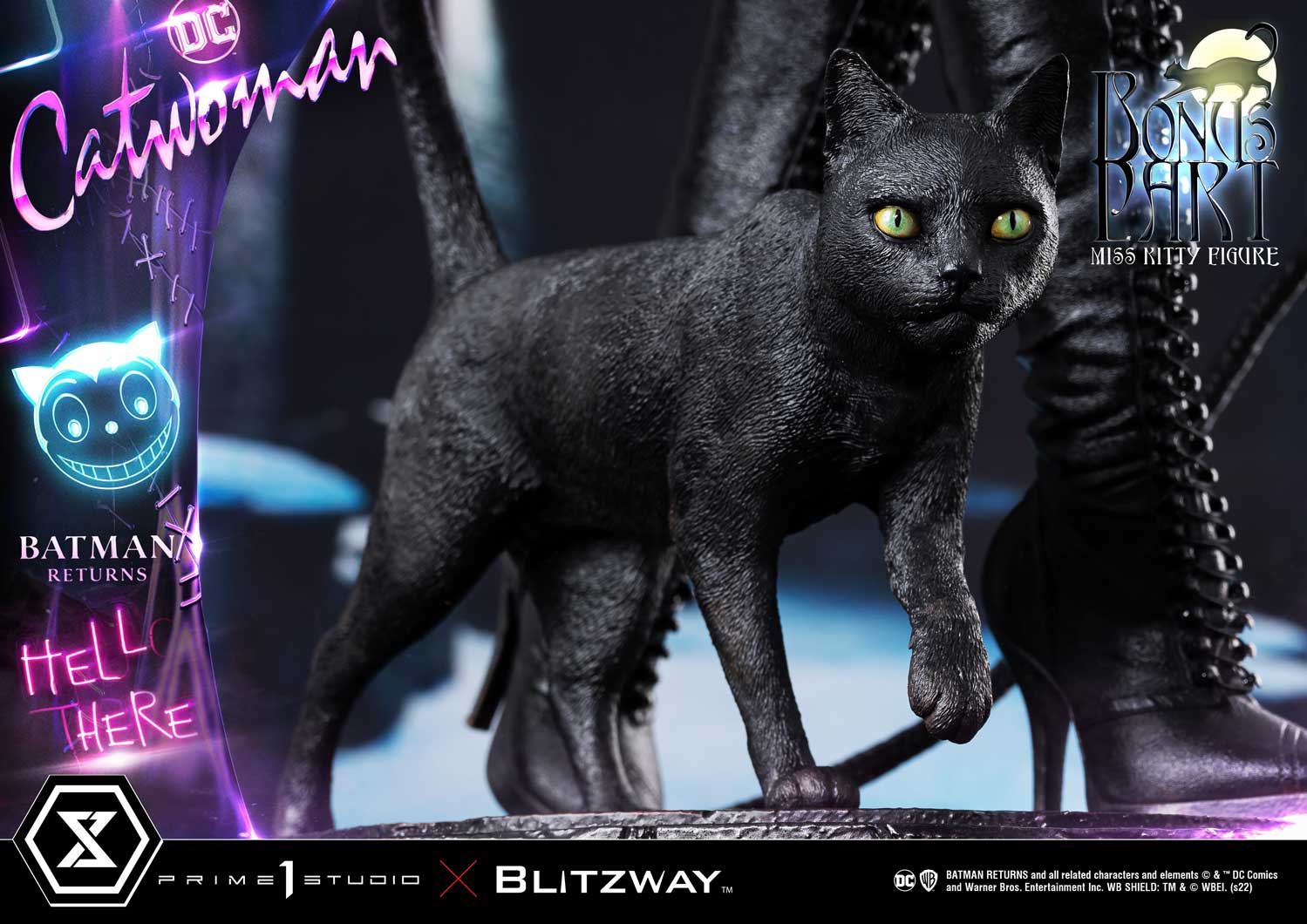 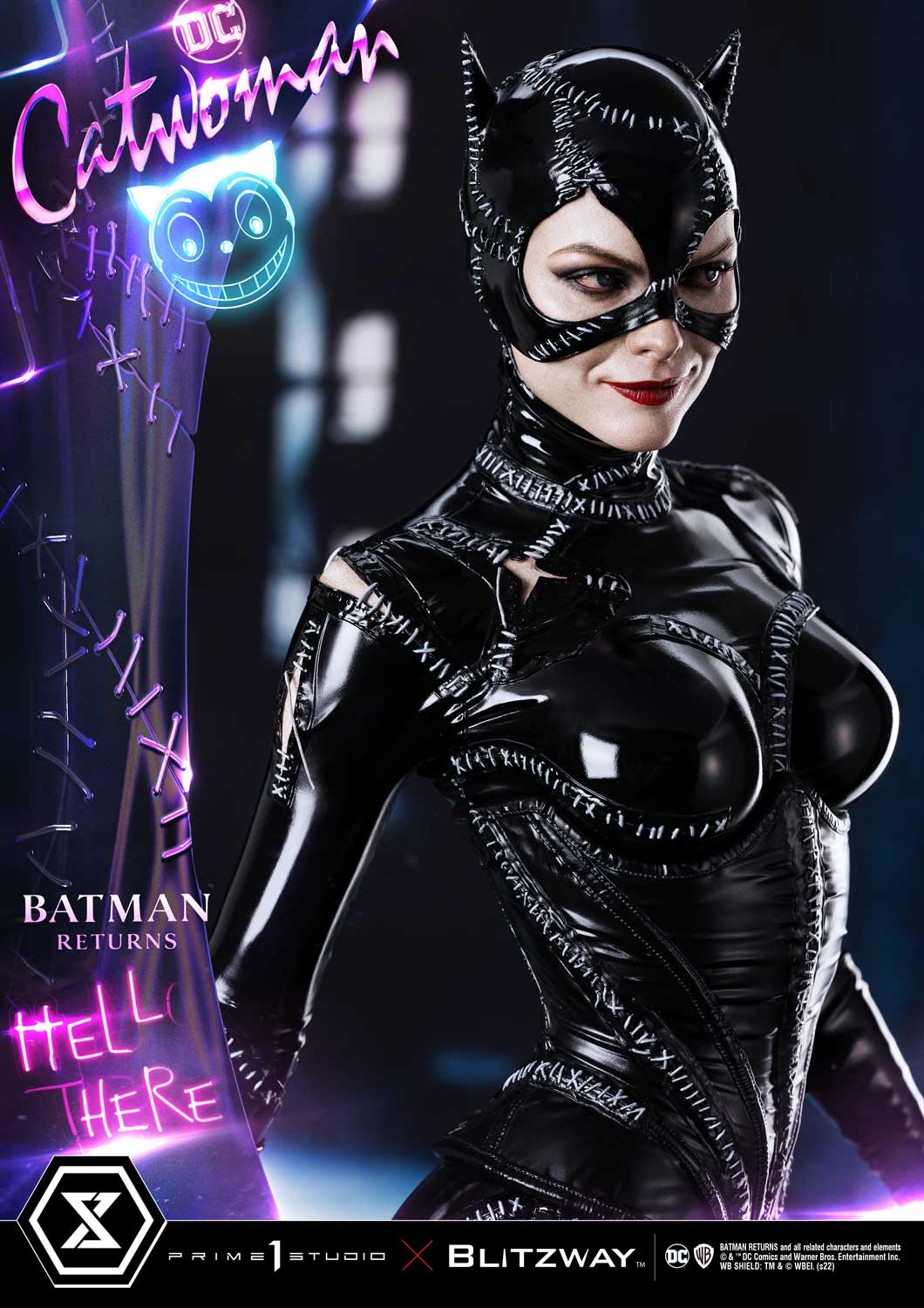 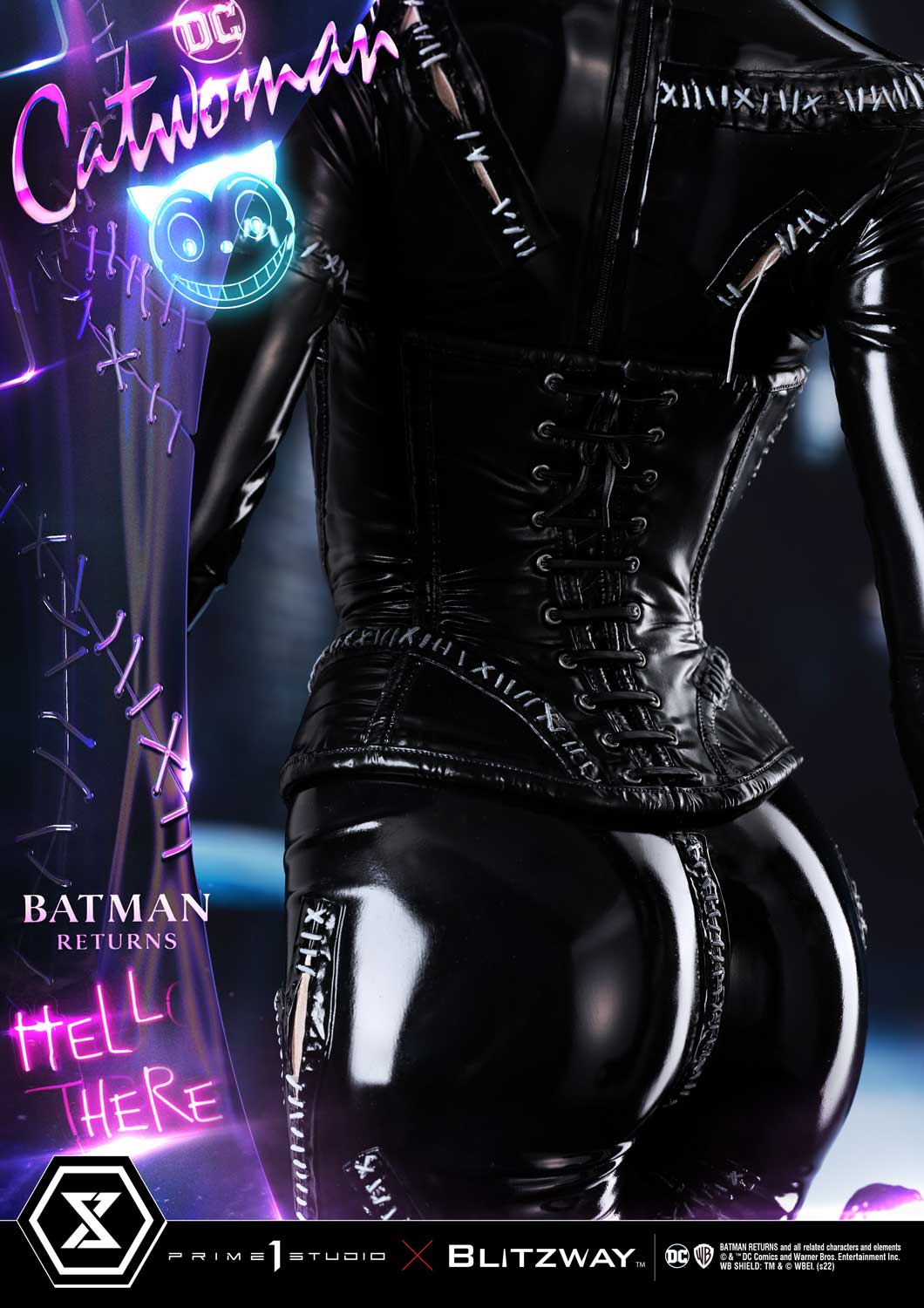 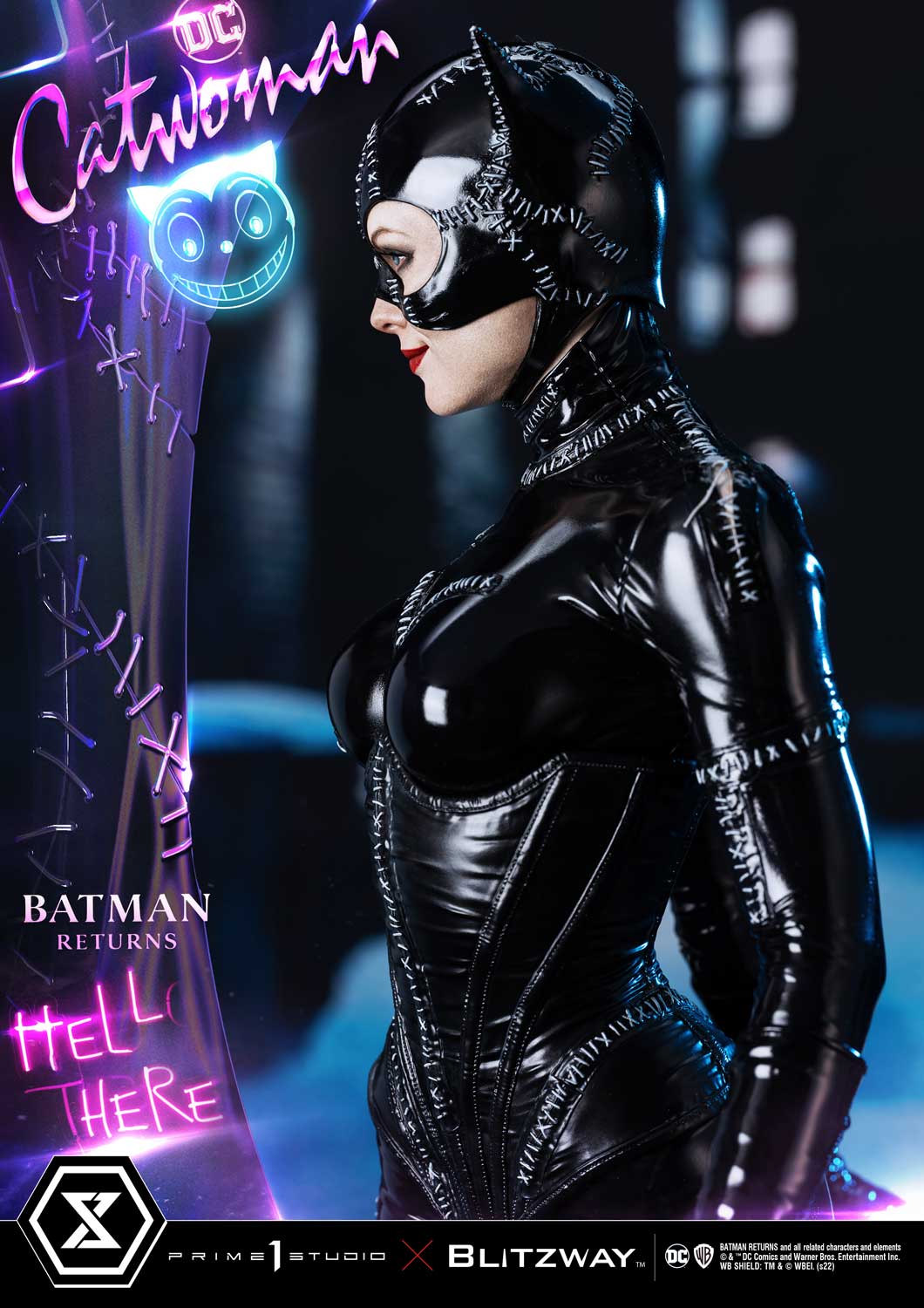 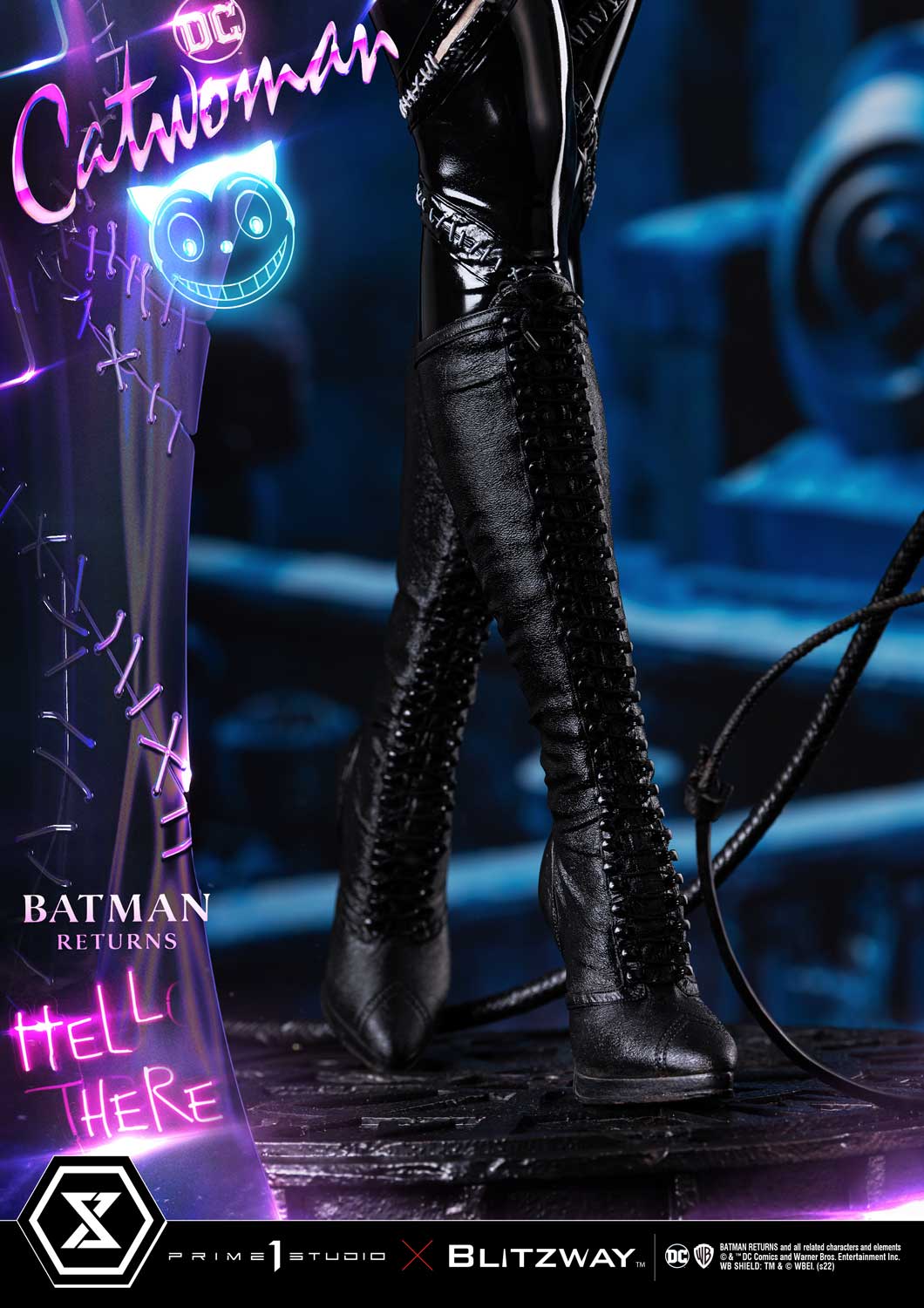 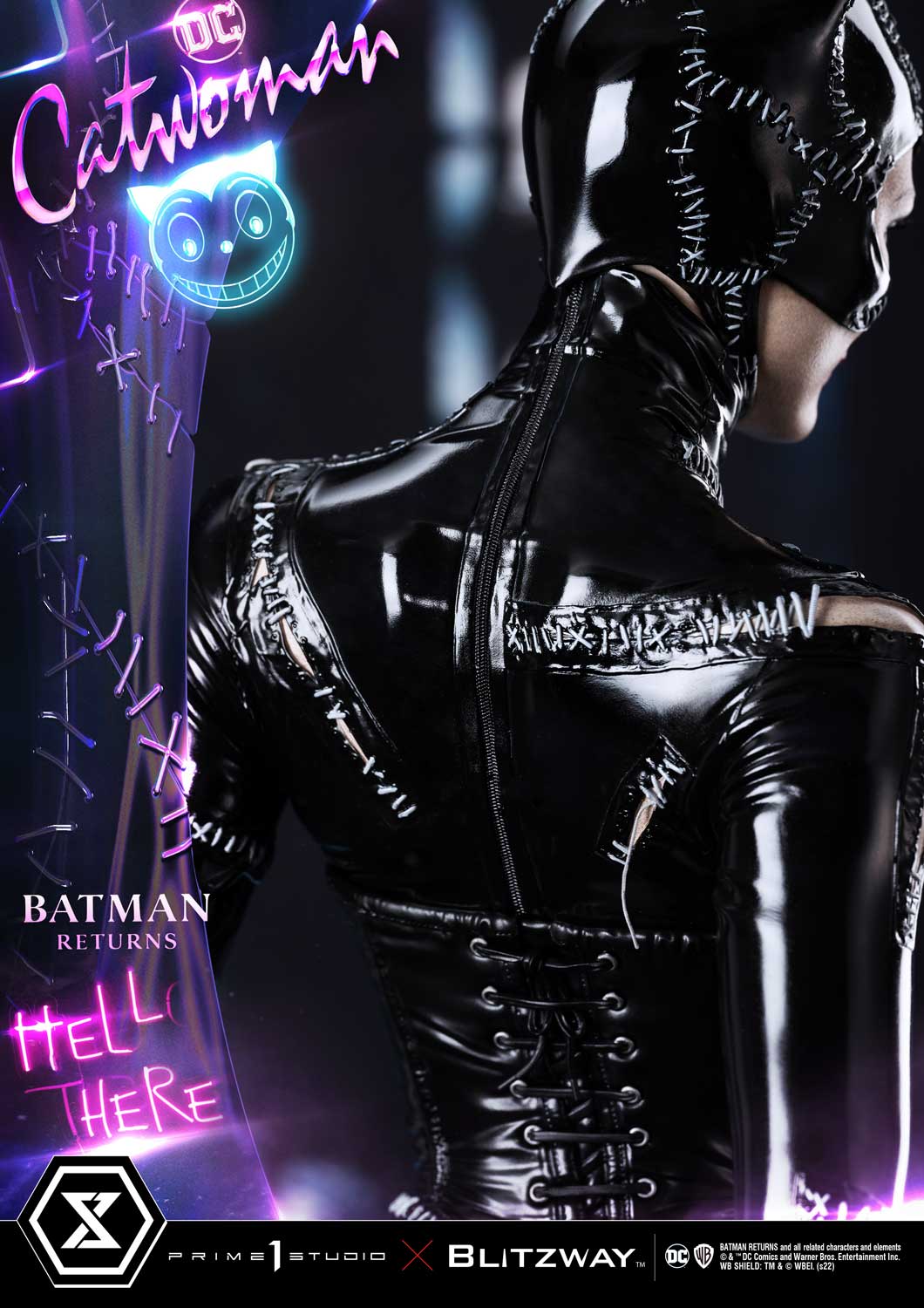 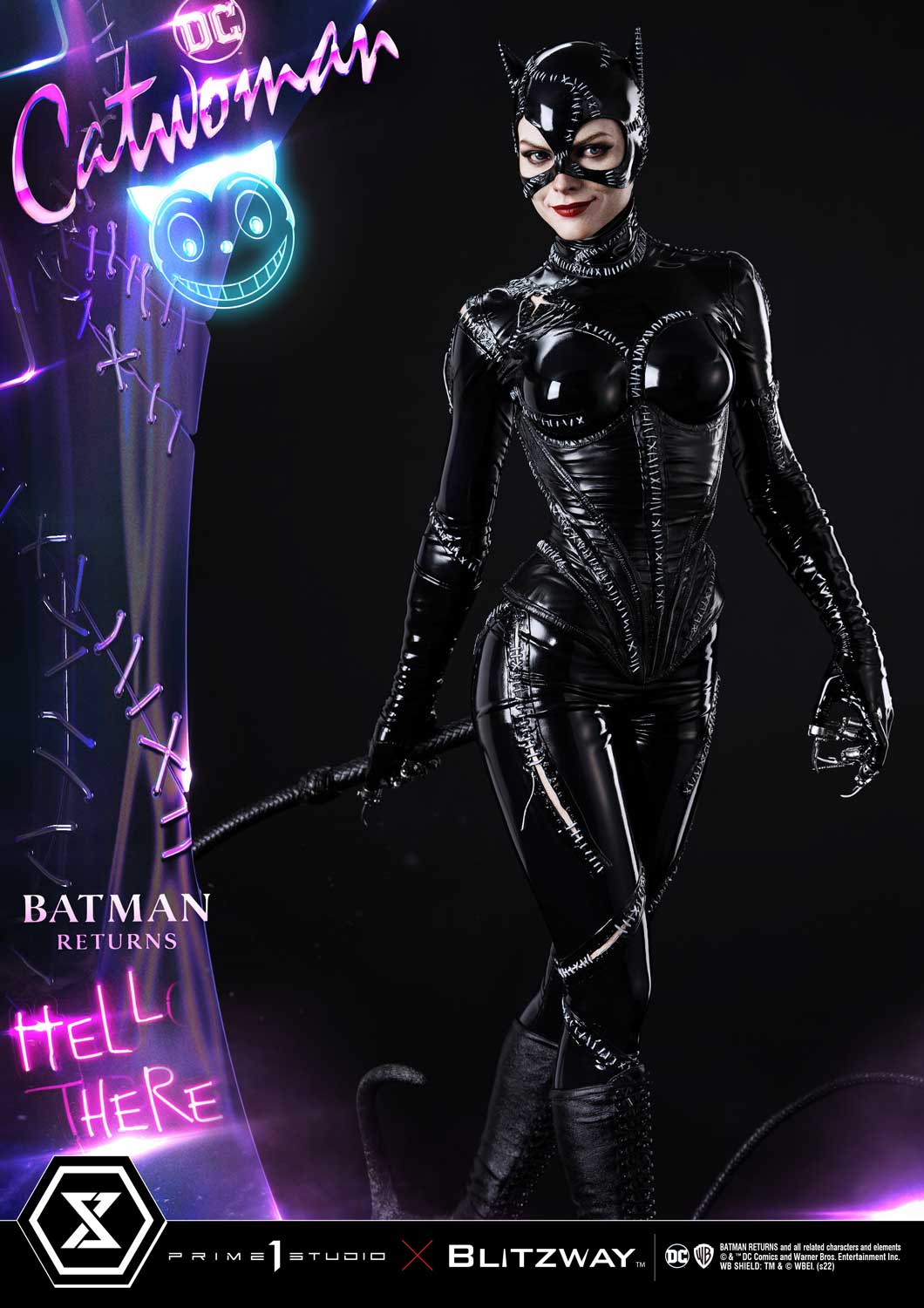 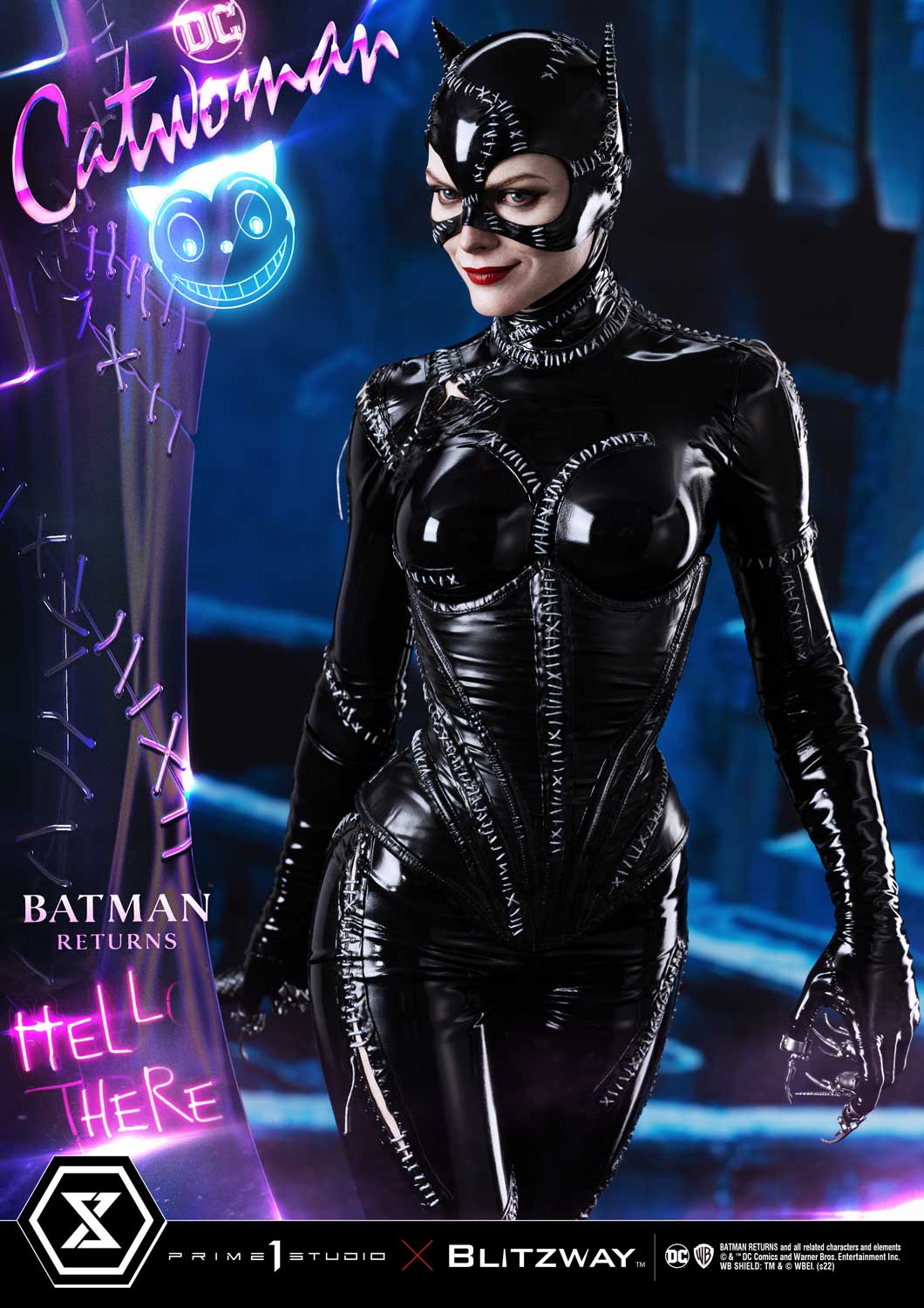 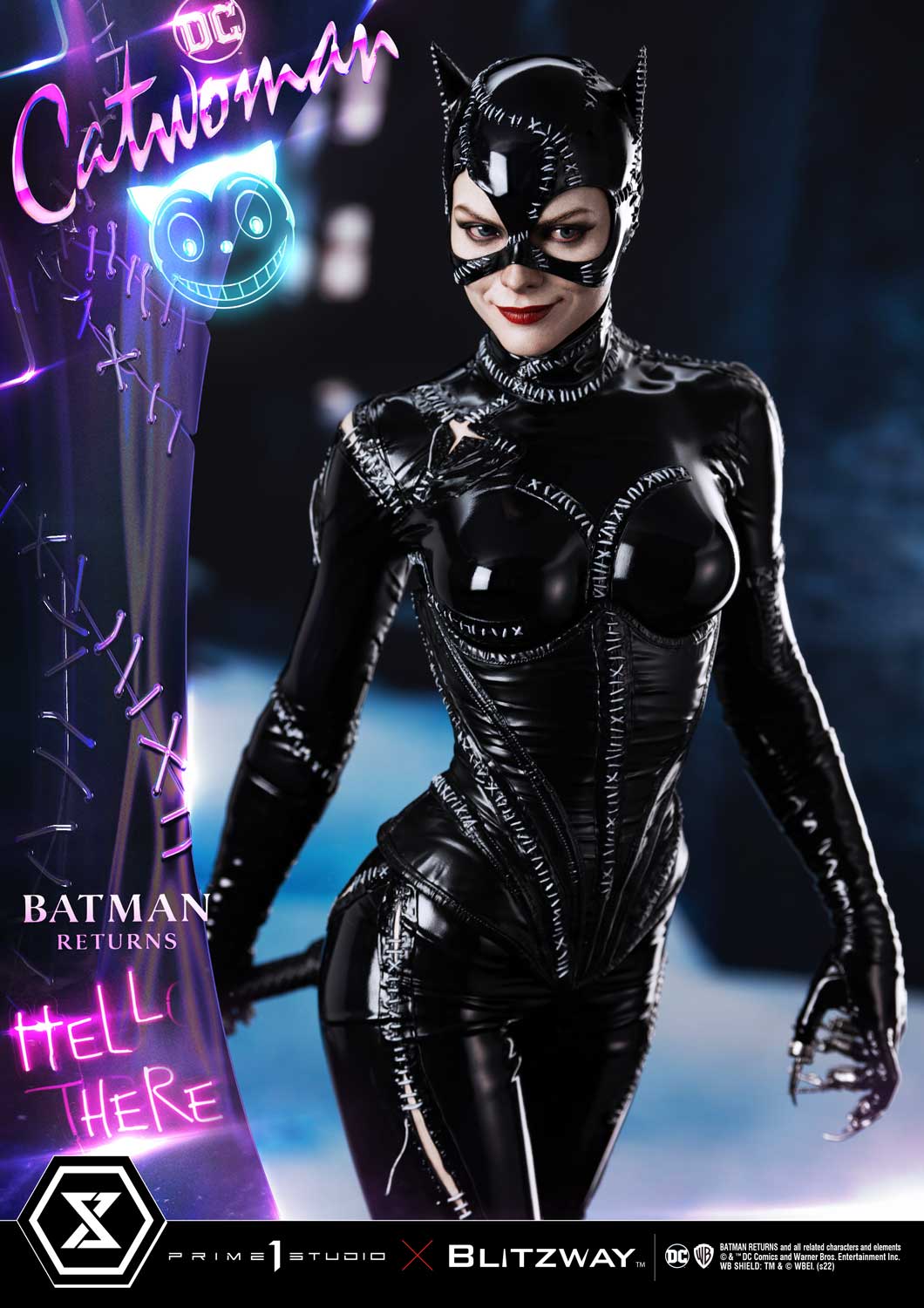 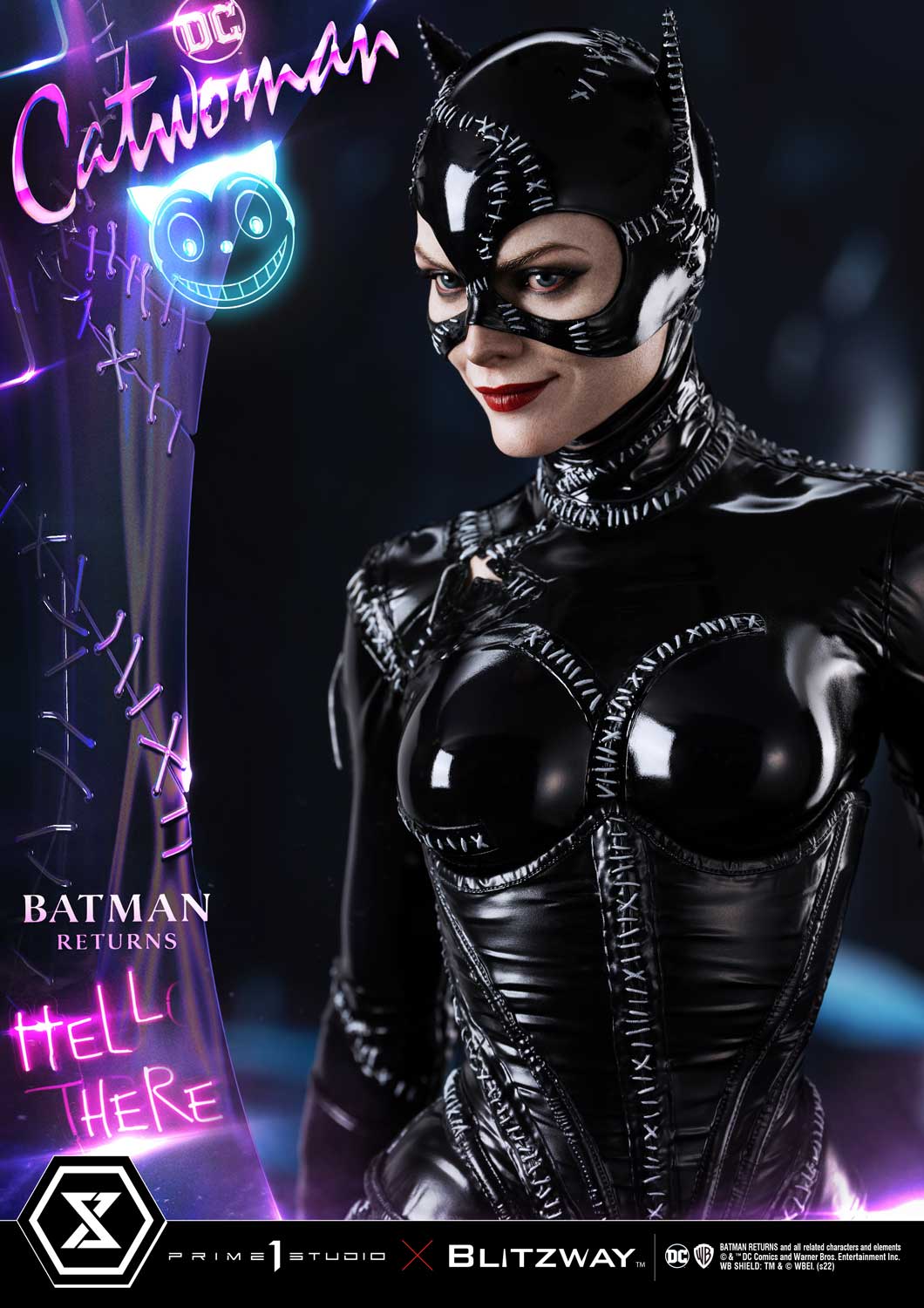 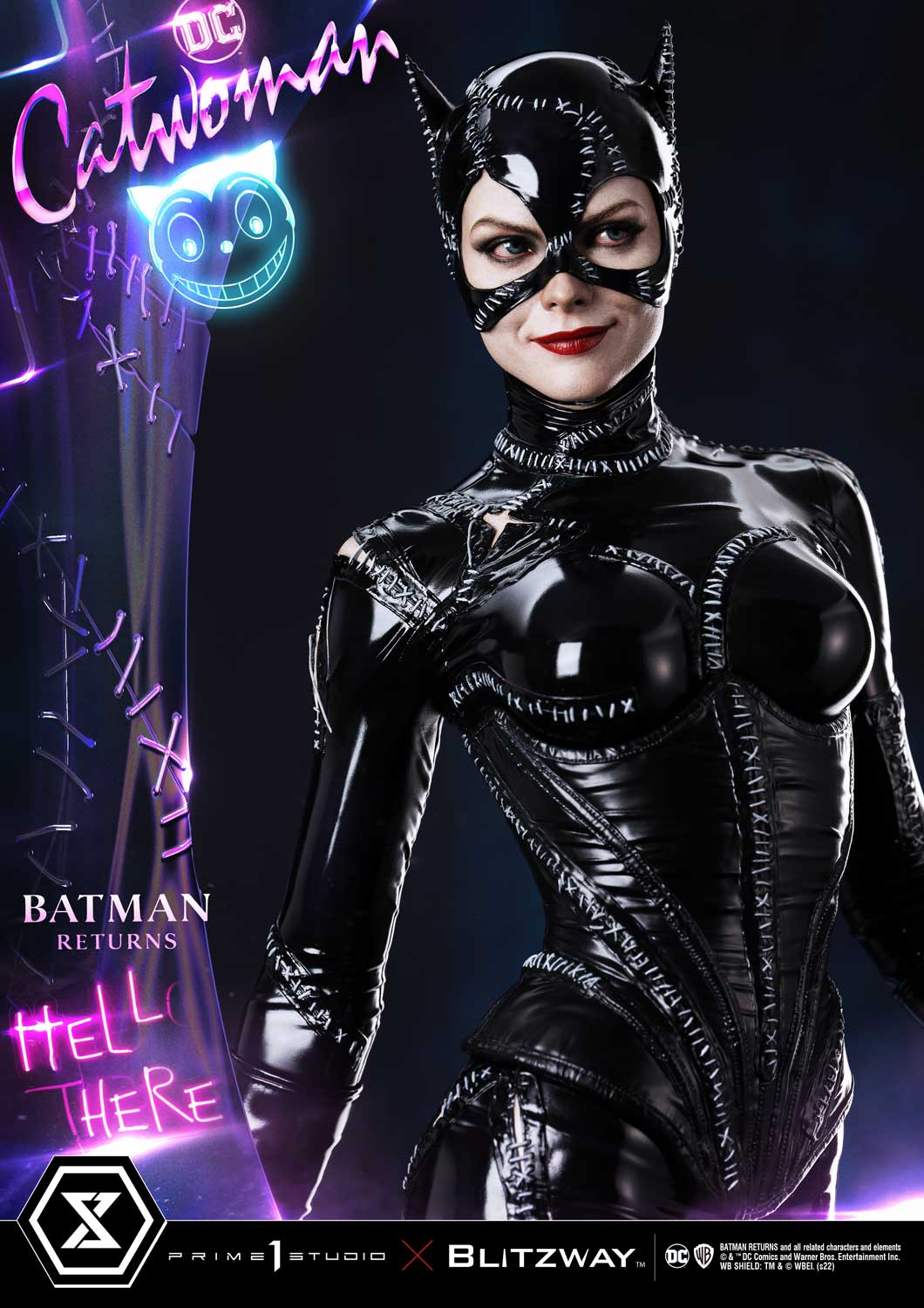 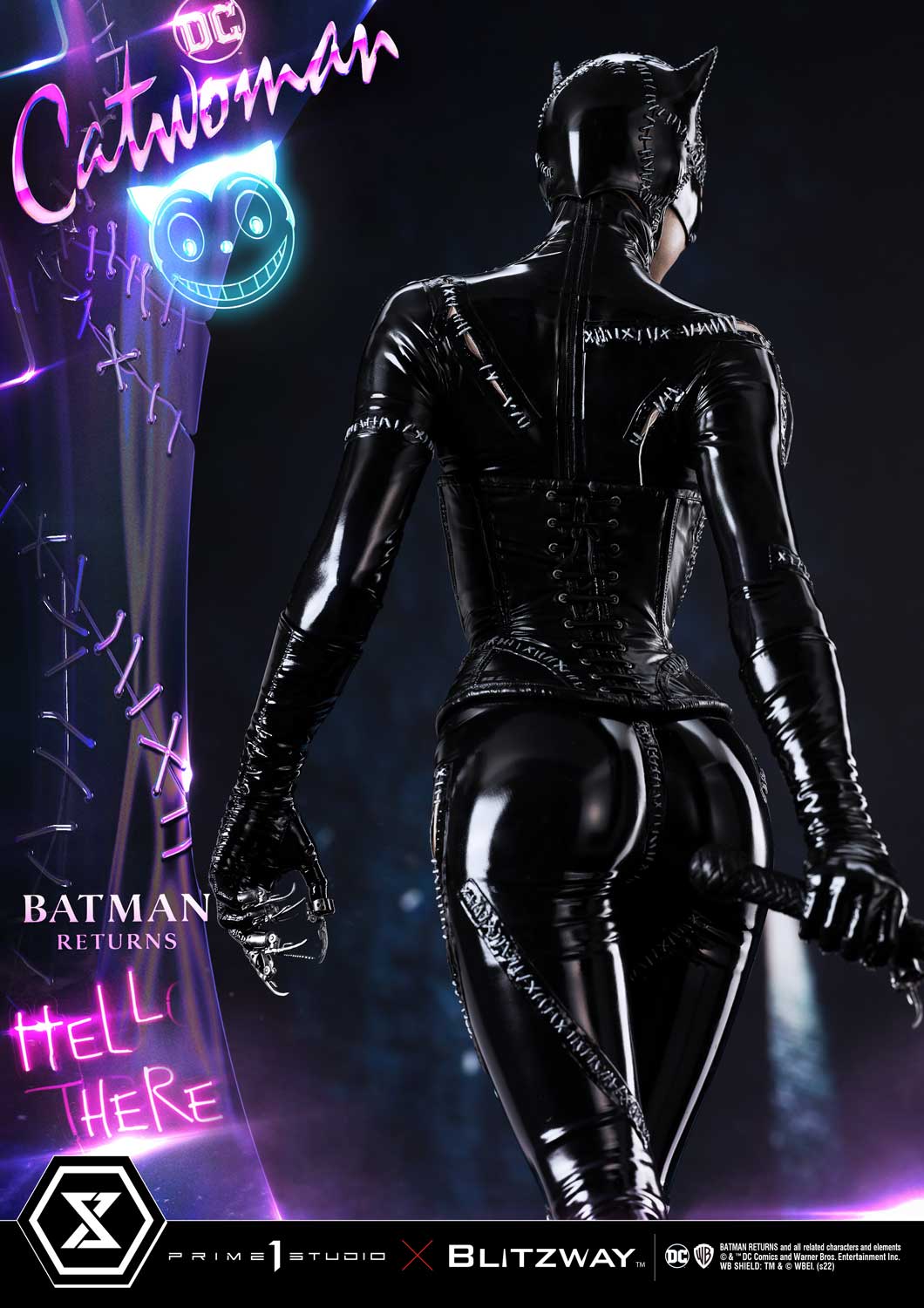