freestyla85 said:
Does she have the metal inner skeleton like bane?
I saw a review on youtube and she is apparently very heavy in comparison to older WW figures, which makes her more stable when standing or posing.
Click to expand...

Had absolutely no interest in picking this up originally but after seeing some of the in-hand pictures I really came around. I don't think the head sculpt is quite there, but it's significantly better than JL and BvS. The silicon/seamless body looks great and a lot sturdier than the JL one that feels like it's about to tear if I breathe on it.

I do like the pop of the glossiness on her outfit, but I also like the muted colors of the JL one, so I'm kind of in between on that aspect. I'll probably just end up giving her some of the accessories from my JL version and displaying just the 1984 version.

I actually was planning to wait for InArt to do their version, but she's gotta be 2 years out minimum, so I'll just revisit that when it becomes a reality.

sj2106 said:
Maybe it's just the cheap rooted hair killing the look but I much prefer the new sculpt for this figure.
Click to expand...

Hmm, yeah I think the typical faux hair HT does is serviceable but now seems under par, especially now that InArt is introducing a better standard for mass produced figures. (But HT is capable, like the GOTG Vol. 2 Gamora for example.)

Checked and didn’t see this video posted here. HT showcasing the improvements they’ve made to this figure on their socials.

Gipetto0812 said:
Checked and didn’t see this video posted here. HT showcasing the improvements they’ve made to this figure on their socials.

Honestly I think it's a great release. I went from no interest in it to eager for her to ship. Already planning to swap her out for my current JL figure. In a couple years this will probably get swapped for InArt but for now, I'm excited.
D 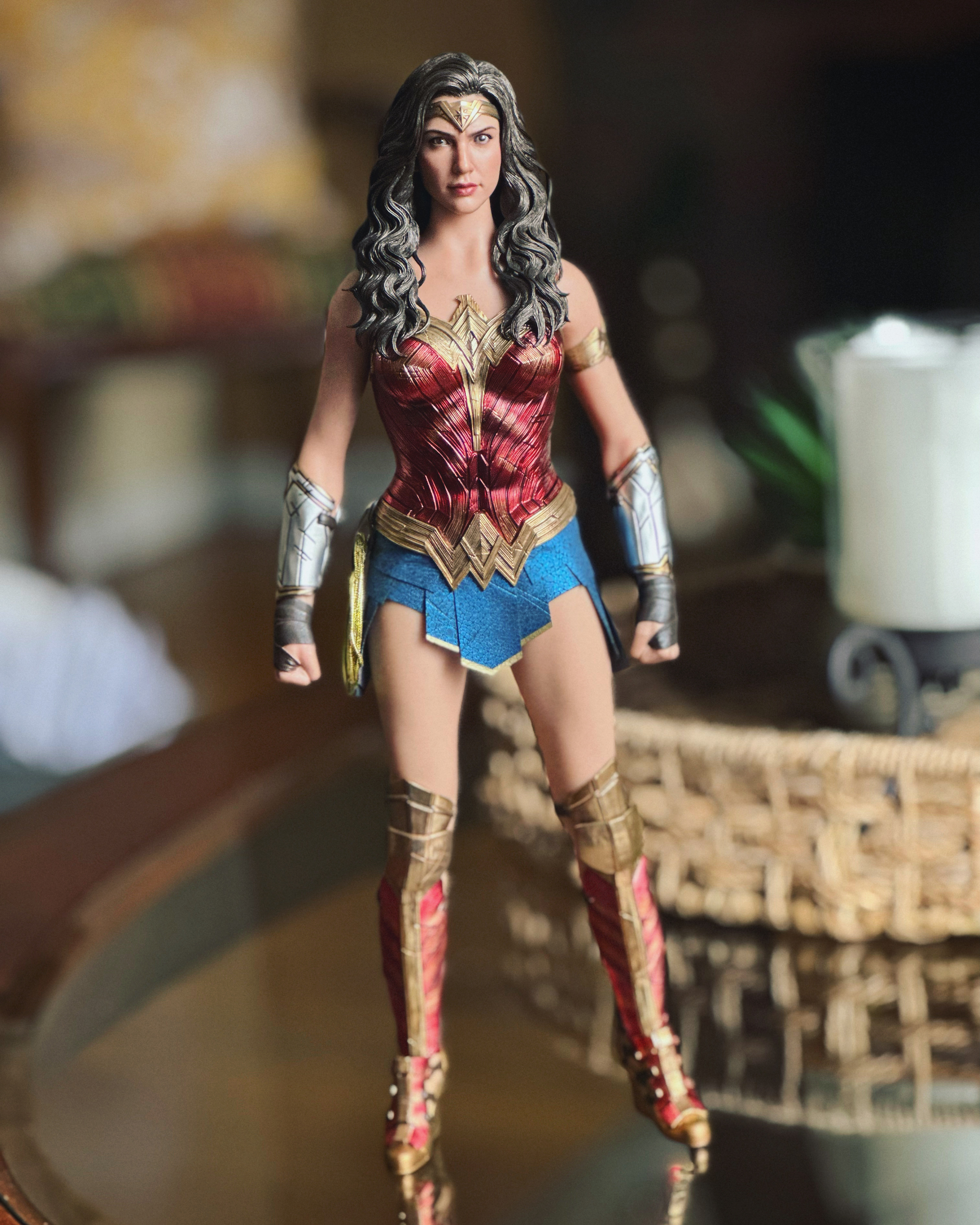 If nothing else I need to at least pick up that head for my BVS WW. Would be a huge upgrade.

Great pics and thanks for showing a comparison with Bats and Supes!!

davejames said:
If nothing else I need to at least pick up that head for my BVS WW. Would be a huge upgrade.
Click to expand...

I think the skin tones may be problematic by trying to do a head swap. Her JL and BVS figures have very tan skin compared to this one. But still worth a shot. When mine comes in I can put the head on my JL figure if it helps you.

No idea when mine will ship though I just placed my order with Sideshow on Monday.

That hair needs some futzing.

Seems to sit a bit high, but looks great!
R

I’m hoping her torso proportions are similar enough to the JL version that I can swap the armor for the more muted colors of the old breastplate and skirt.

Man, you're so obsessed with CM (or Bree?) that you probably own a Nissan or 2.

Looks very nice but I think it would look even better on the WW84 body and you can even use the Tiara.
That is if you are planning on getting WW84

Bleah said:
That hair needs some futzing.
Click to expand...

KitbashOfficer said:
Man, you're so obsessed with CM (or Bree?) that you probably own a Nissan or 2.
Click to expand...

That looks great! I've been trying to snag up that head sculpt from Toy Anxiety or Monkey Depot but I never get to it in time. But now that I ordered this new one with the sculpted hair I might not worry as much.