I've read all of Miller's stuff so many times, I have most of it memorized.

But for whatever reason, the last one of his major works I ever read was "Born Again."

It so completely blew me away, I've made a point to NOT re-read it too many times. I think I've only read it about 4 times in total, so it stays "fresh."

I just re-read it this week and my god, it's aged like a fine wine. What an absolute masterpiece. It's probably the very pinnacle of his writing.

I love all his stuff for different reasons, of course. My favorite overall will always be Dark Knight, and everything from Sin City to Ronin to 300 all have wonderful elements to them as well. But as far as just straight up best script, I might have to give it to Born Again. For best art I'd go with Elektra Lives Again...that was Frank and Lynn just taking it to the next level on every page, but I still think the story is rather weak. 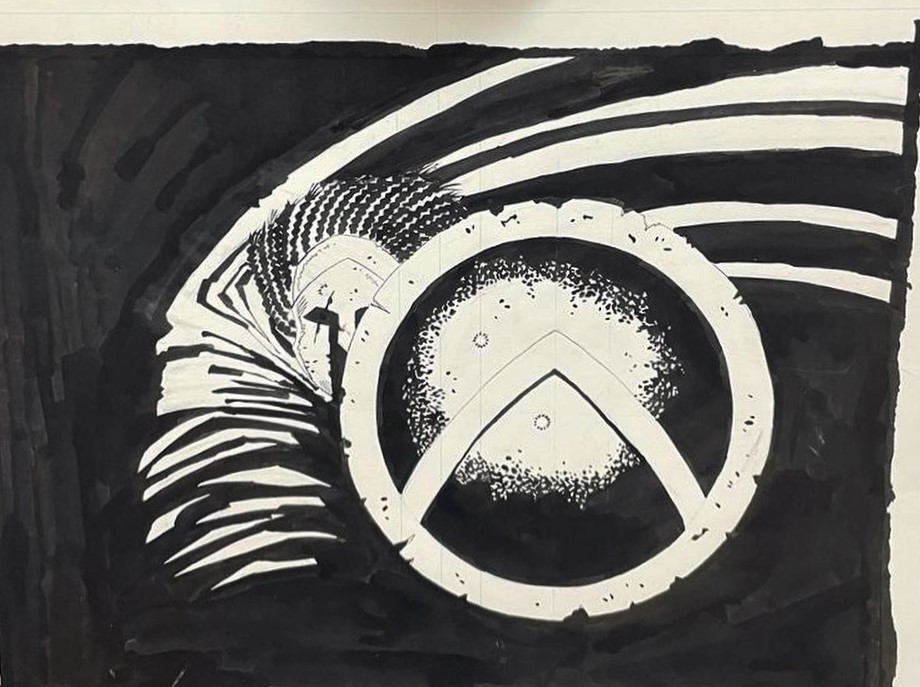 Frank's mature stylistic art is not for children. I don't think any kid will like his or Mignola's or Chaykin's stylistic art one bit. It is too mature for them. I also didn't like their art when i was younger but now, as an adult, i love their art. It's amazing, so bold and full of character. Frank Miller is also a great comic book writer. We shouldn't forget Year One and Born Again, they are also up there That shows Miller's writing is also top notch, when he is really pationet about a project.

Miller still do work but the word of mouth around those works that they are such a fiascoes... All Star Batman, Superman: Year One, Xerxes and even if i don't want to mantion that, but holy terror... I only read All Star Batman among them, it wasn't what i would like to see, but i also enjoyed his evil Batman. I have the Superman: Year One HC but it still stays in shirink wrap on the shelf... I don't know... May be Frank lost his passion or something...
Last edited: Apr 9, 2022

Dotanuki said:
Frank's mature stylistic art is not for children. I don't think any kid will like his or Mignola's or Chaykin's stylistic art one bit. It is too mature for them. I also didn't like their art when i was younger but now, as an adult, i love their art. It's amazing, so bold and full of character.
Click to expand...

Well I guess I'll toot my own horn and admit that I was a snooty little kid, cause I loved all three of these guys when I was a kid.

Miller was the best of course, cause of Dark Knight. There was something about his art that just drew me in like a magnet. It wasn't always pretty...sometimes it's just downright grotesque, but it was so powerful and dynamic I couldn't look away.

In fact, I think Chip Kidd specifically chose some of the "uglier" shots from Dark Knight when he designed the paperback covers about 20 years ago. Instead of shying away from that, he leaned into it: 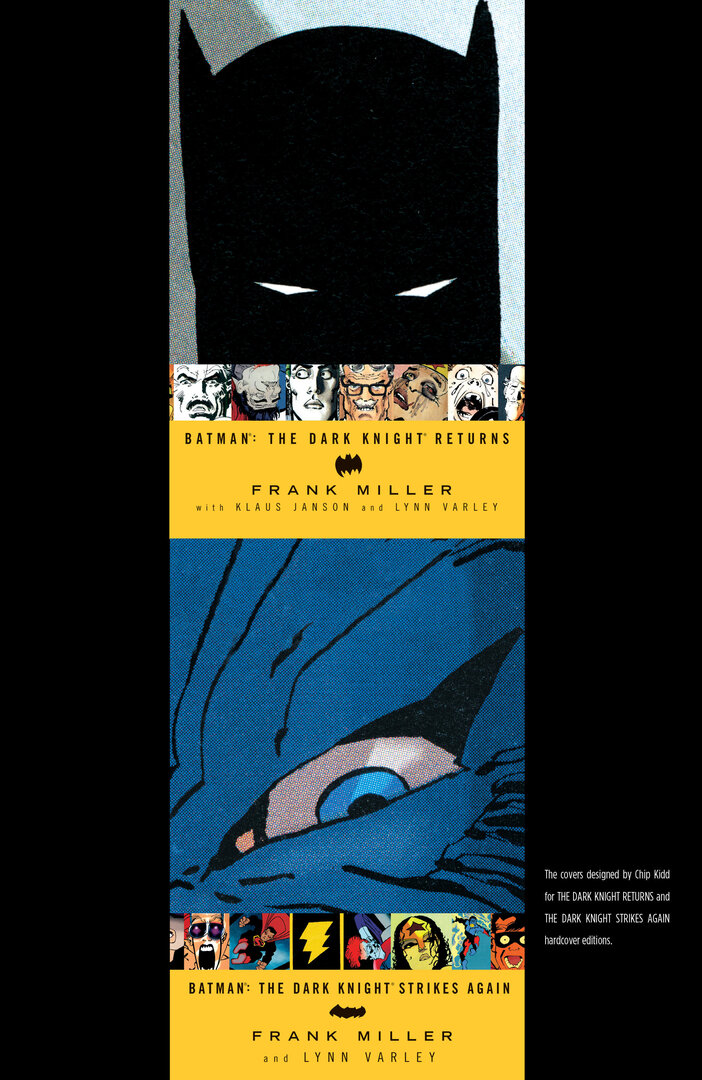 I know I sound like a broken record, but I think Frank's most beautiful art comes from that period after Dark Knight but before Sin City....his linework was exquisitely detailed and Lynn Varley's colors were almost other-worldly. Unfortunately, there's not a lot from this period but the covers for the Wolverine trade, the 12 Lone Wolf and Cub covers, and the entire graphic novel Elektra Lives Again are the works I'm talking about.

Then he started Sin City and it's almost like he was reborn as an artist. The first storyline still retains that insane level of detail in the pencils, but by Dame To Kill For, he's jumped in the atmospheric and abstract black and whites a lot more. I think Dame To Kill For is probably my favorite Sin City story. Yes, the story itself is rather cliche but that's fine...it's a riff on the noir genre. I think it's the artistic peak of the series, although he would certainly get far more abstract by the time "Hell and Back" rolled around.

As for Mignola...I think I was aware of him doing an issue here or there on late 80s DC stuff, but I didn't really recognize him for his name and style until Cosmic Odyssey. Again....I just loved what he was doing. His use of shapes and blacks was so different from everything else I'd seen til that point. He's also matured a lot as an artist over the years, but I was already a fan in the 80s after that. I also LOVED his work on "The Jungle Adventure" with Wolverine...remains one of my favorite Wolvie comics.

As for Chaykin, I didn't have as much exposure to him as a kid but I DID get the three issue mini series he did for "Blackhawk" and I found it really, really complicated and hard to understand. LOVED the art though. When I met Mr. Chaykin at a con in 2018 and told him I read that story in 5th grade, he chided me and told me I was "too young." He's probably right, but I've read and re-read it over the years and now I finally "get it" so I can enjoy the story as much as I liked the artwork. 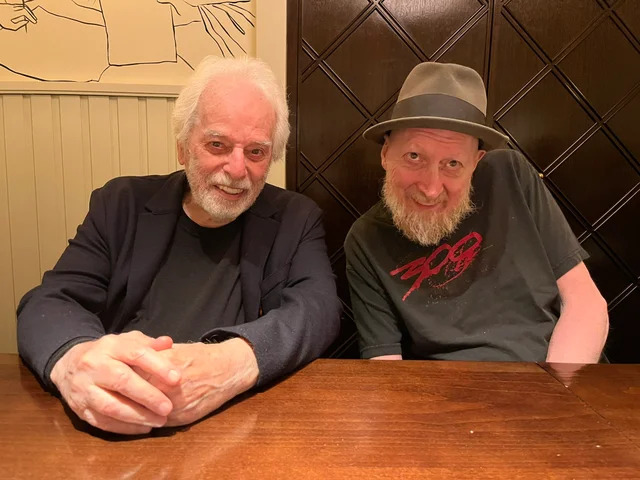 Geez, poor Frank. He clearly went through something awful. I'm glad he seems to have recovered but it definitely took its toll on him. There are pics from about 10-15 years ago where looked minutes away from death. Never been confirmed, but it certainly seemed like he was fighting some form of cancer. And there's the rumors of his incredibly crippling alcoholism.

Here he is with legendary madman filmmaker Alejandro Jodorowsky. If you didn't know, which one would you guess was well into his 90s and which one is about 3 decades younger??

Frank is starting his own comic book company. No idea why he waited so long. Nothing terribly exciting announced...an unnecessary sequel to Ronin, some Sin City stuff drawn by other people. No idea if he even CAN draw anymore or just doesn't want to. 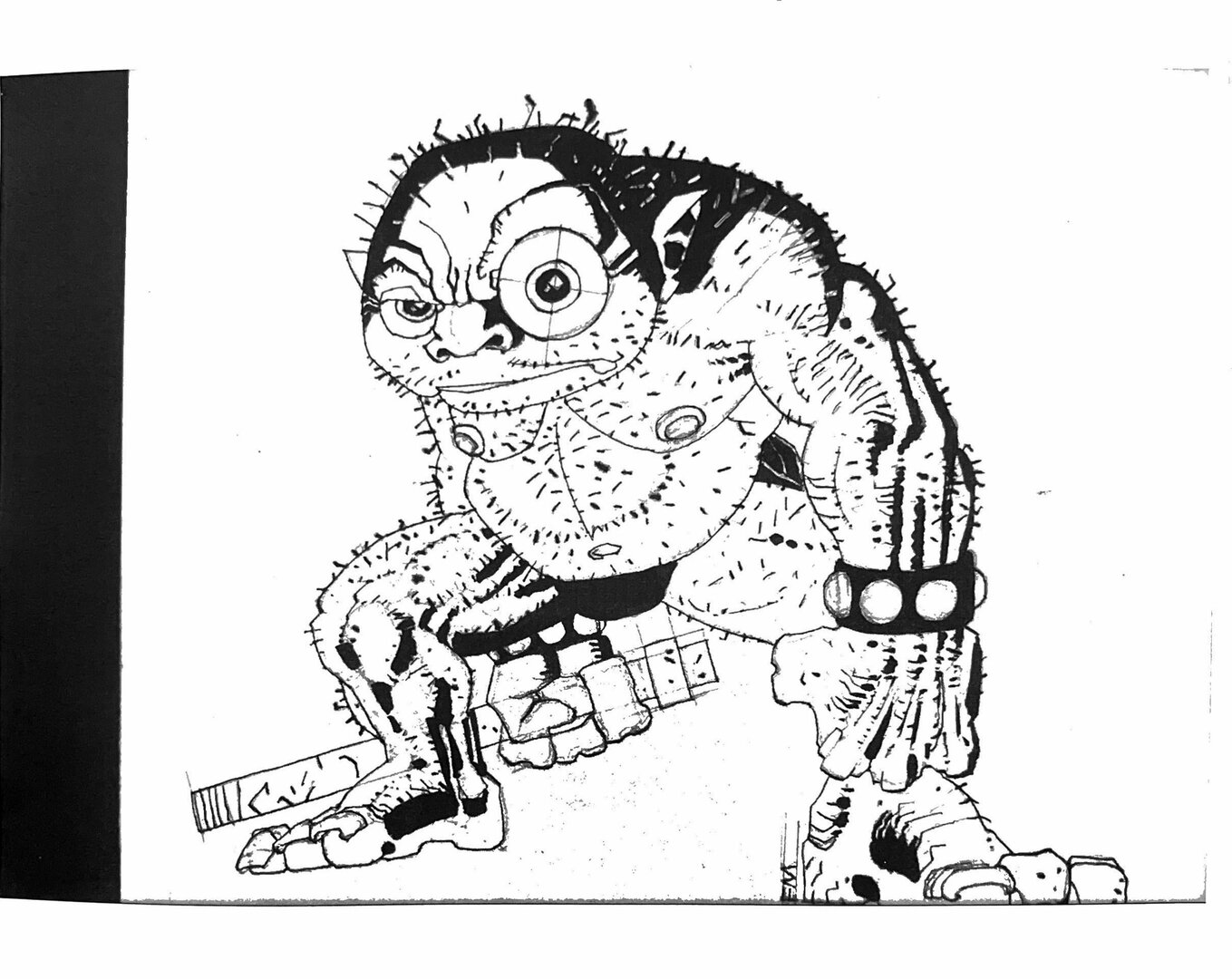 I don't know man. I love the guy and he'll always be my favorite, but clearly his best work is decades in the past.

Just like my favorite rock star Axl Rose. He turned 60 this year and he's still out there, but he lost his voice years ago. He's out there squeaking like Mickey Mouse and it's just so sad. Sometimes it's just time to retire and just go enjoy your mansion and millions of dollars.

Yesterday I visited a friend I hadn't seen in a few years.

I'm a Frank Miller fanatic, but this guy is a FRANK MILLER FANATIC.

I have never witnessed such an amazing collection of original sketches, art, and autographs as I did at my buddy's place. He has some INSANE pieces. Just unbelievable. 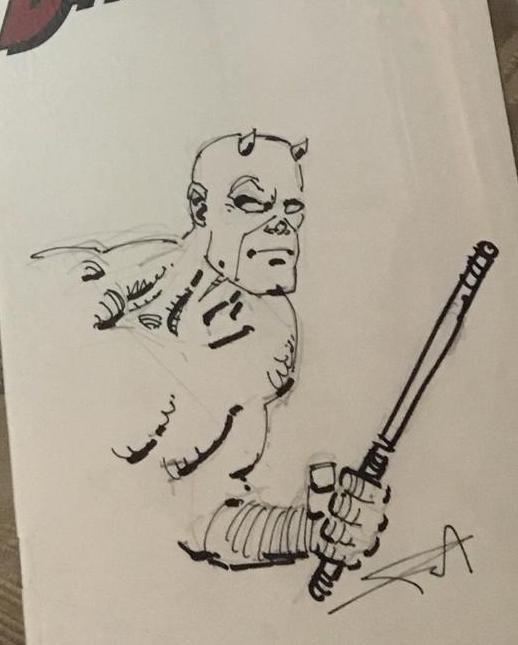 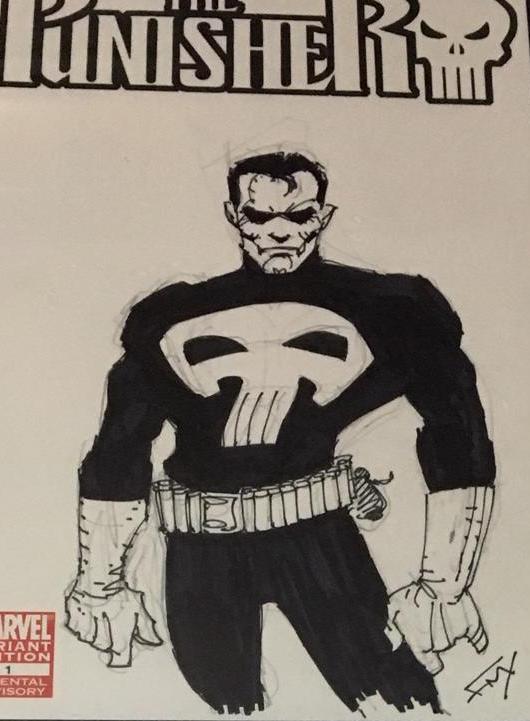 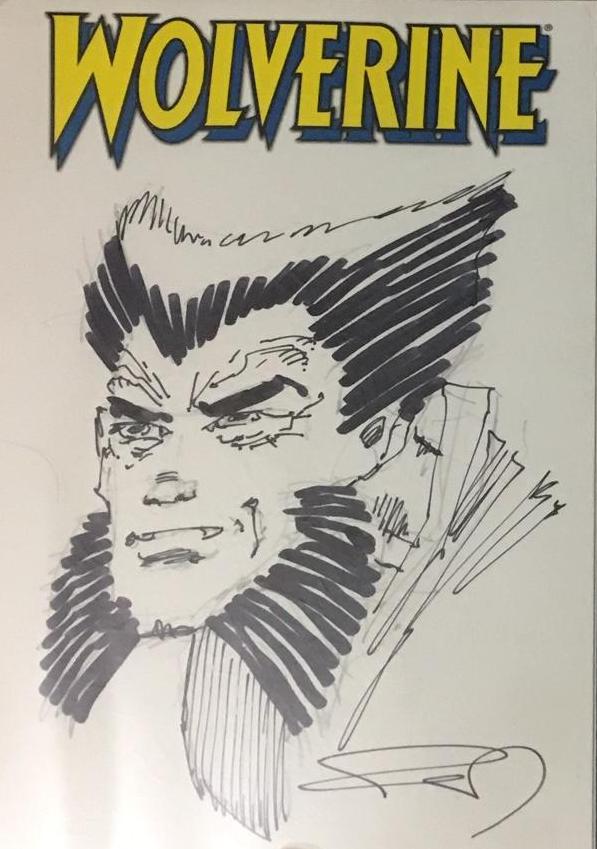 This Spider-Man is particularly cool.... 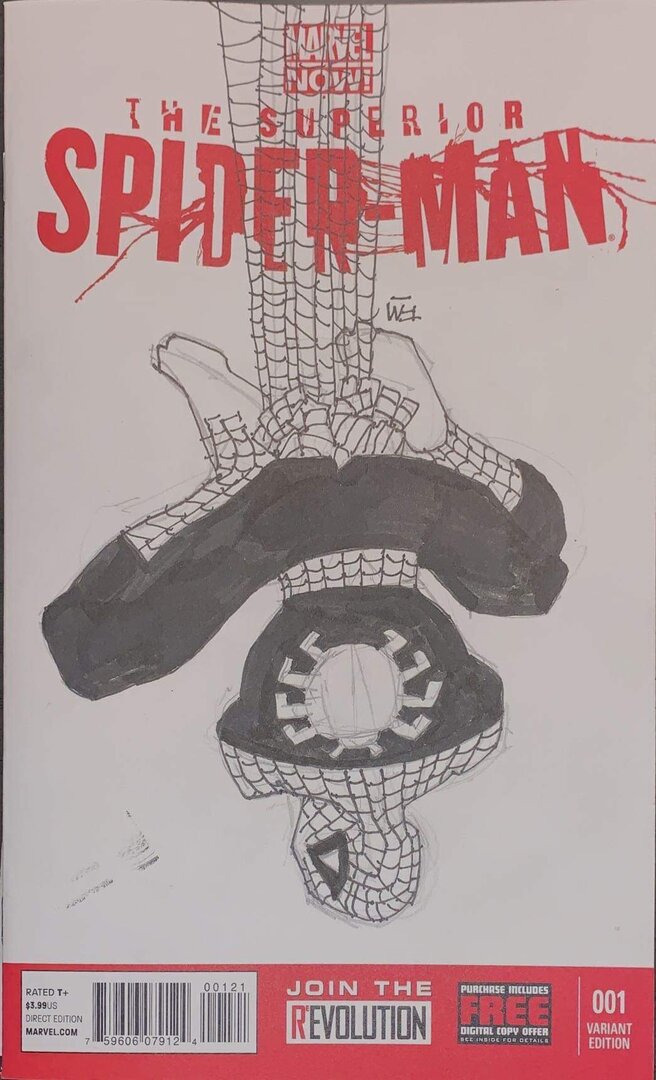 This Wolverine might have been my favorite....I love that it has a full body ninja in Frank's unique style, as well as Wolverine himself. 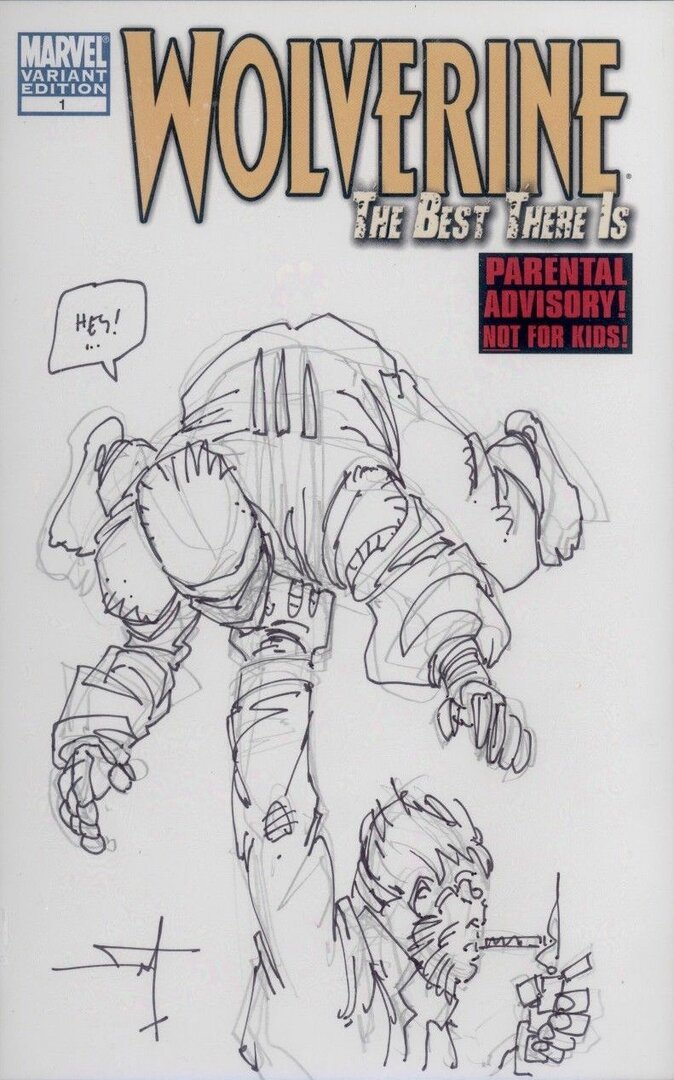 He even had a few pieces penciled by Miller and inked by Janson...or as he called them, "Lennon and McCartney!" 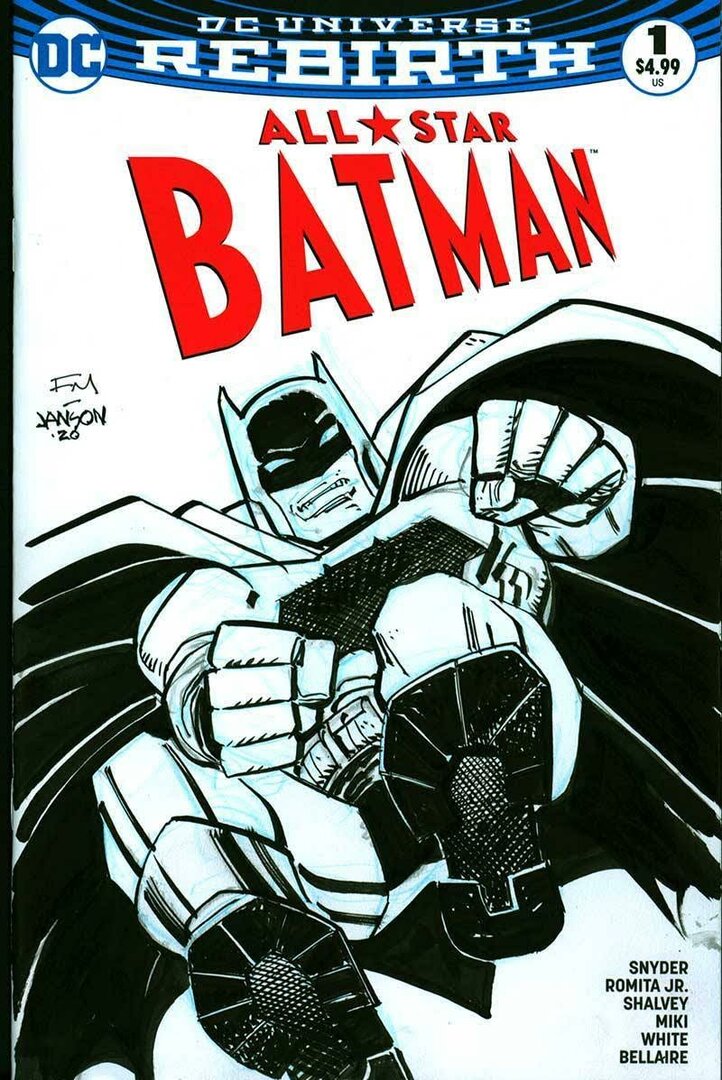 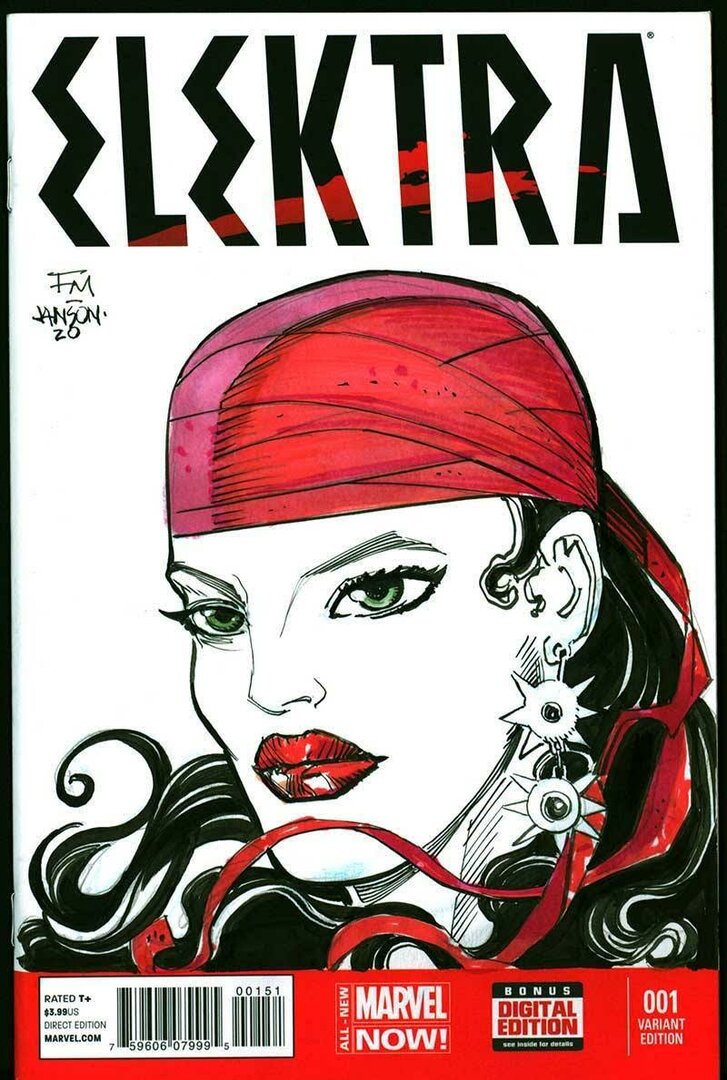 One of the best pieces he had is this portrait of Two-Face. There's lots of linework and detail here. Not just a quick doodle....really looks like Frank took his time with this one.... 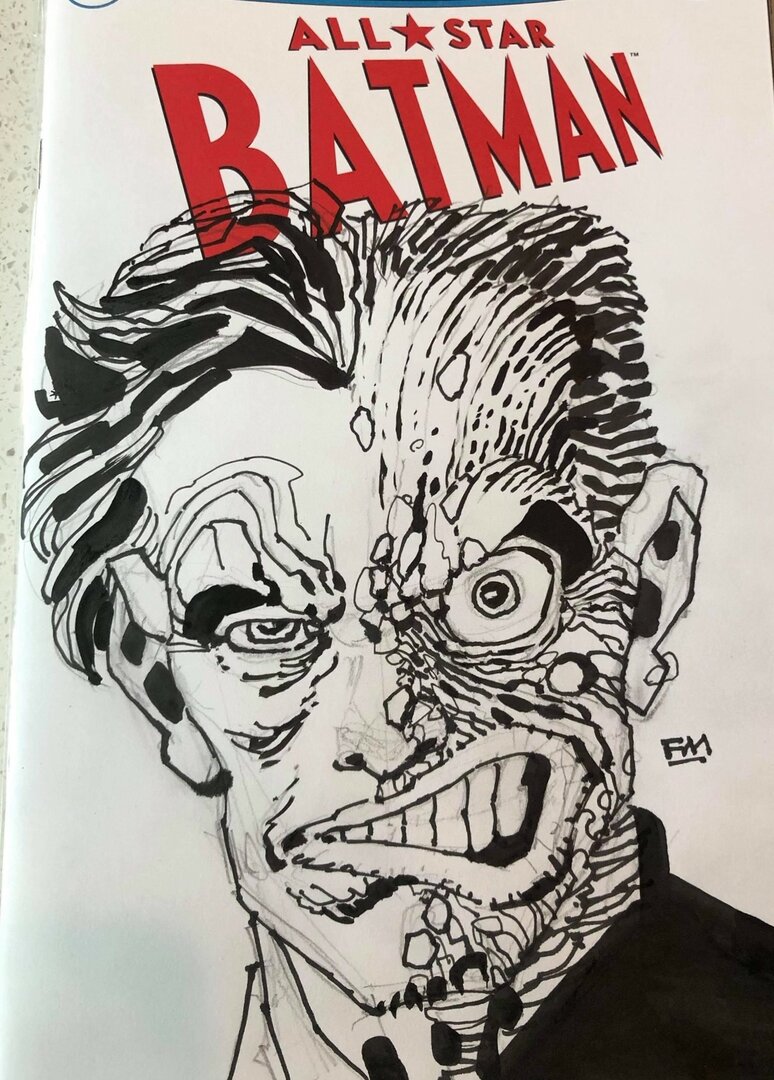 Of course the piece de resistance is this amazingly gorgeous commission of Marv from Sin City. It was framed above my friend's desk. I have never seen Frank do a better commission than this. You can tell he really took his time with this one and it was a labor of love....he took the time to draw and ink all those bricks. He put all kinds of detail into the bootlaces and treads on the boots, and there's little details like Marv's gun "Gladys" and the bullet hole in his shoulder and his cross necklace. And his silhouette on the wall lines up perfectly. This thing is GORGEOUS. It's better than most of the stuff he's actually had published in the last few years!! I really hope this piece ends up getting used someday as a cover or a pin-up or something. It's too good not to share with the world. I can't believe I got to see it close up. The actual paper that Frank's pencil and marker touched. Not a xerox, not a scan....the REAL THING. It's incredible. 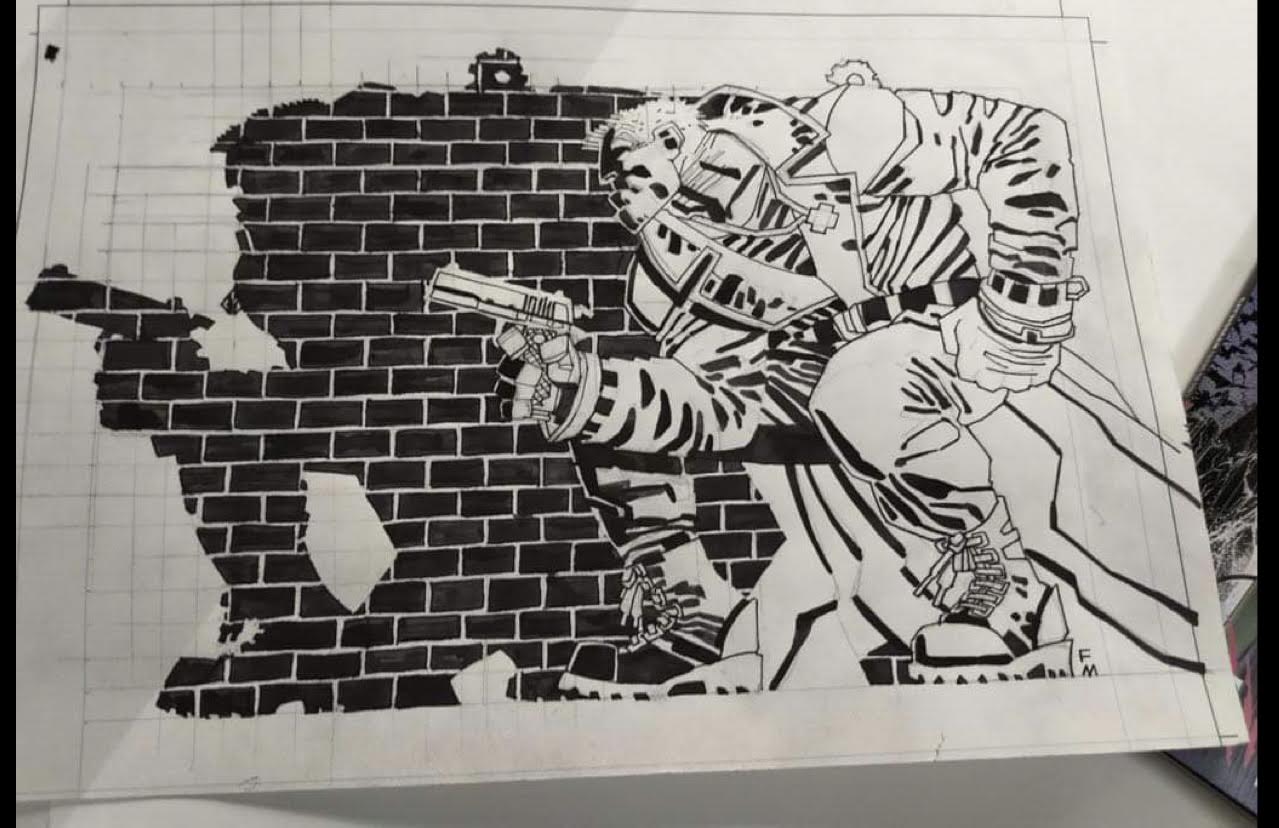 And as if all that weren't enough, my buddy went above and beyond and got something for ME.

Not only did he get the ultra-reclusive David Mazzuchelli to sign the artist edition of "Born Again".....he got Miller himself to personalize it to me.....AND included a quick little head sketch of Daredevil!!!

I'm in complete disbelief.....I can't believe I actually OWN this!
A

Wow…what a stunning collection of original Miller art. The Two Face is fantastic. Thank you so much for sharing and congrats on the Mazzuchelli signature. I always loved his art as it really reminded me of Alex Toth. What a great pair they made on Year One and Daredevil.

Coming in October is a "new" Spider-Man variant cover by Frank Miller.

No idea when this was actually drawn. Most likely it was a fan commission that they decided to print. It's certainly from the last few years though. 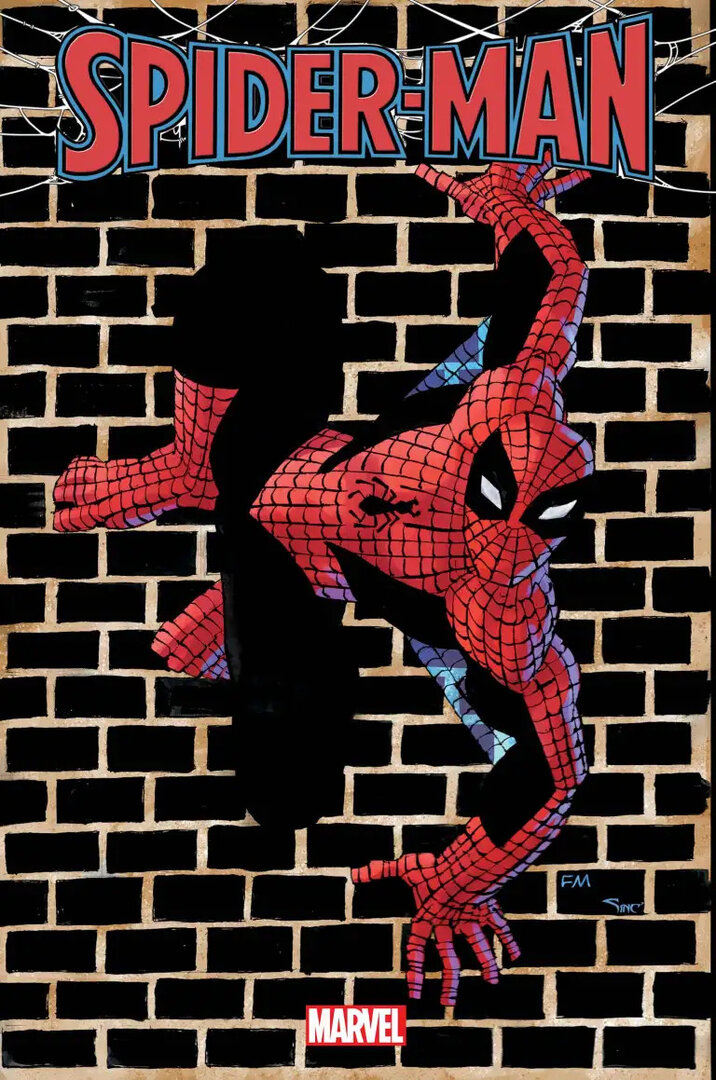 Here's a clearer view of the Spidey commission he did a while back, that happened to be for fellow comics artist Ron Lim: 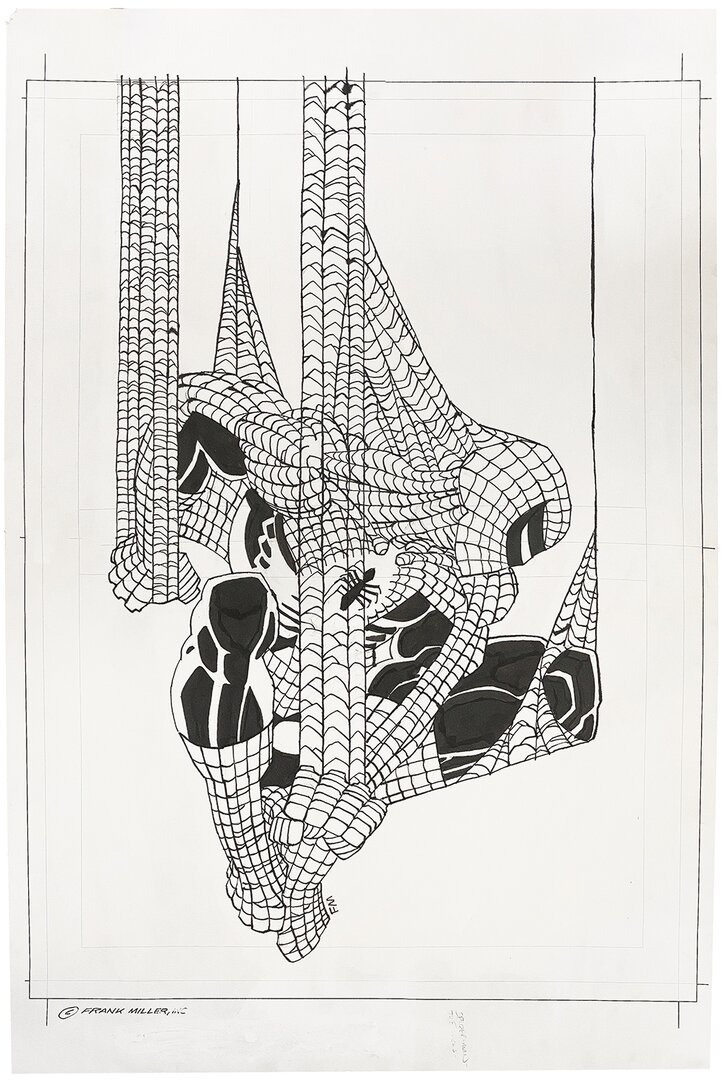 And the same image unofficially colored: 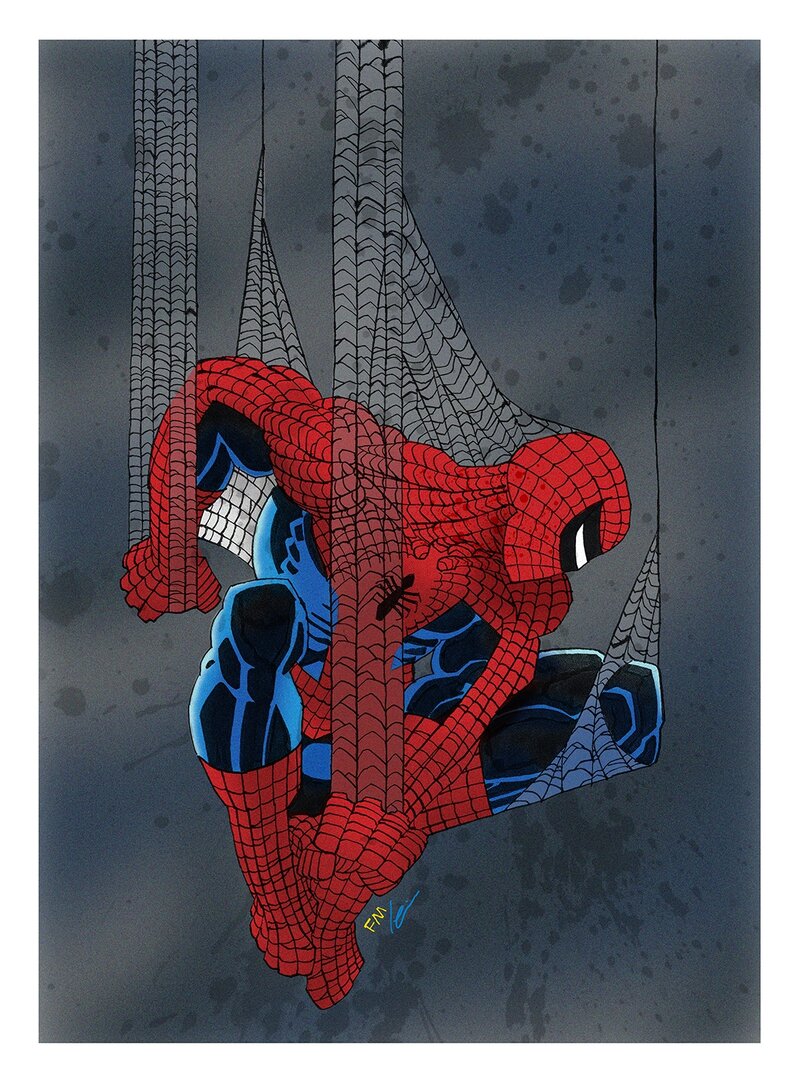 No idea who colored it, but I like it. It has that Varley look to it and is soooo much better than the crappy "shiny" computer colors by Alex Sinclair.

Here's the "new" art that was printed with each volume of the 30th anniversary editions of Sin City.

Some of these choices are absolutely baffling, cause the art is just plain BAD. I can't even defend it....they're just BAD.

And we know for a fact that he HAS drawn better stuff in recent years....so why print this stuff instead? It makes no sense. 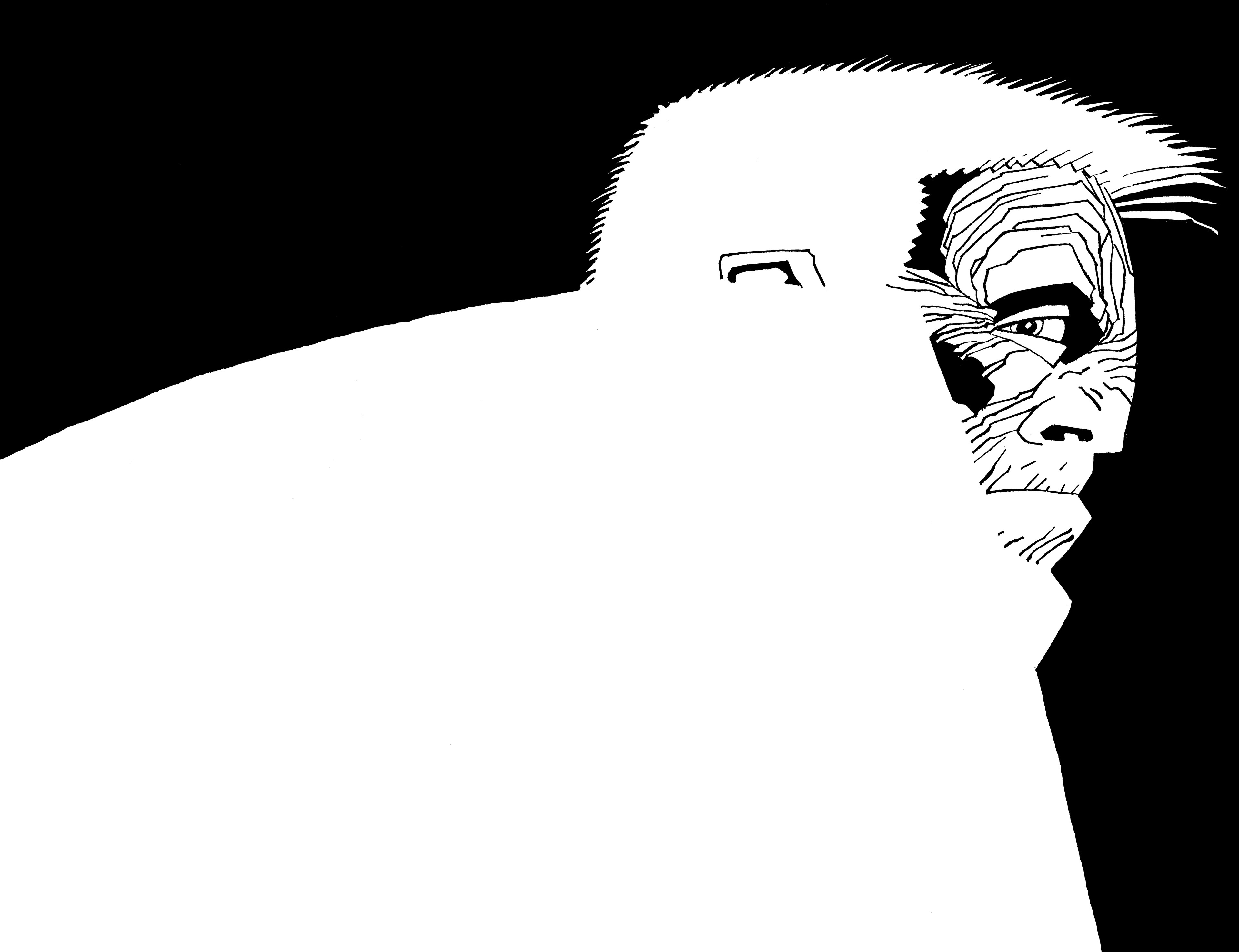 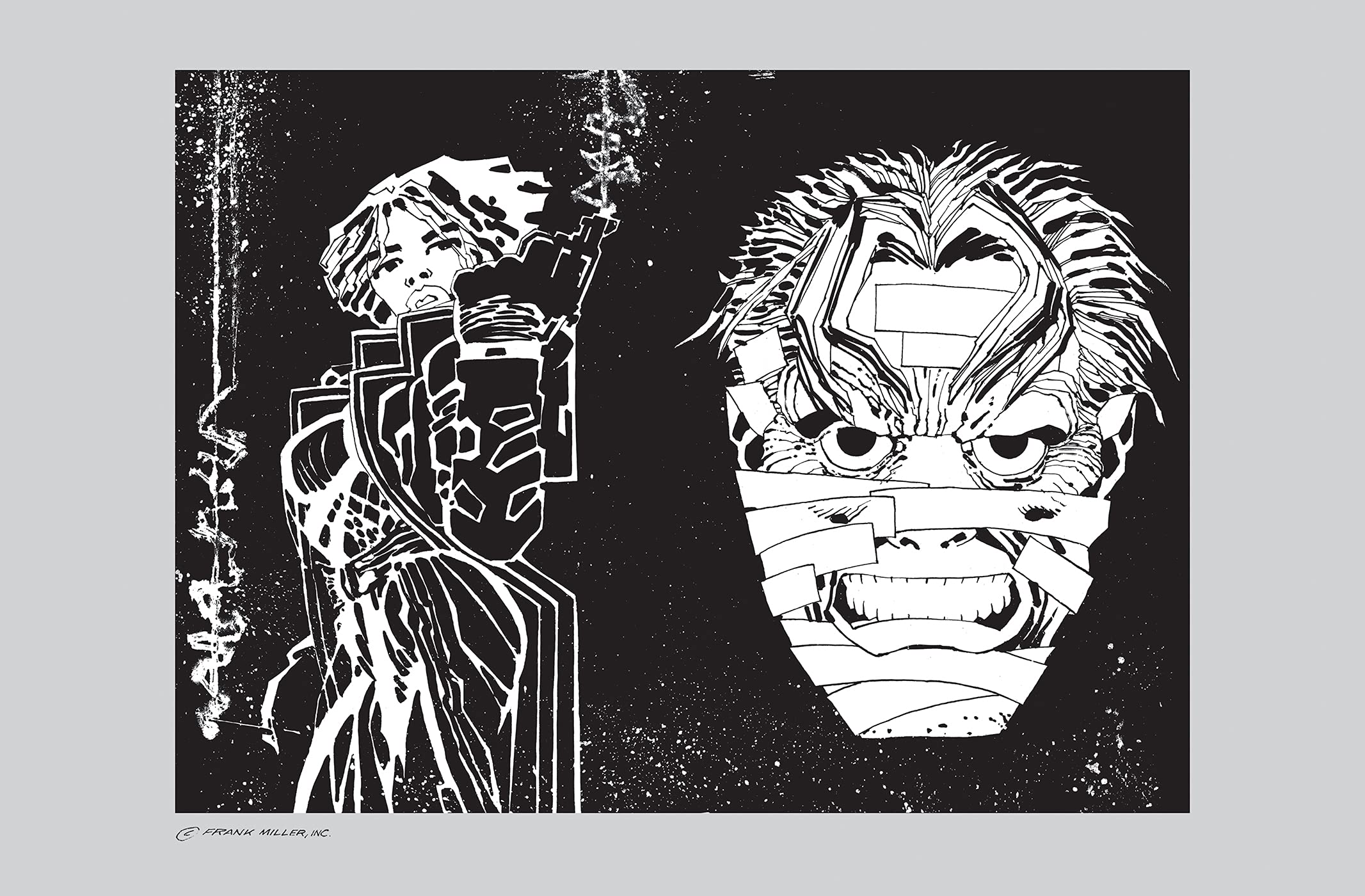 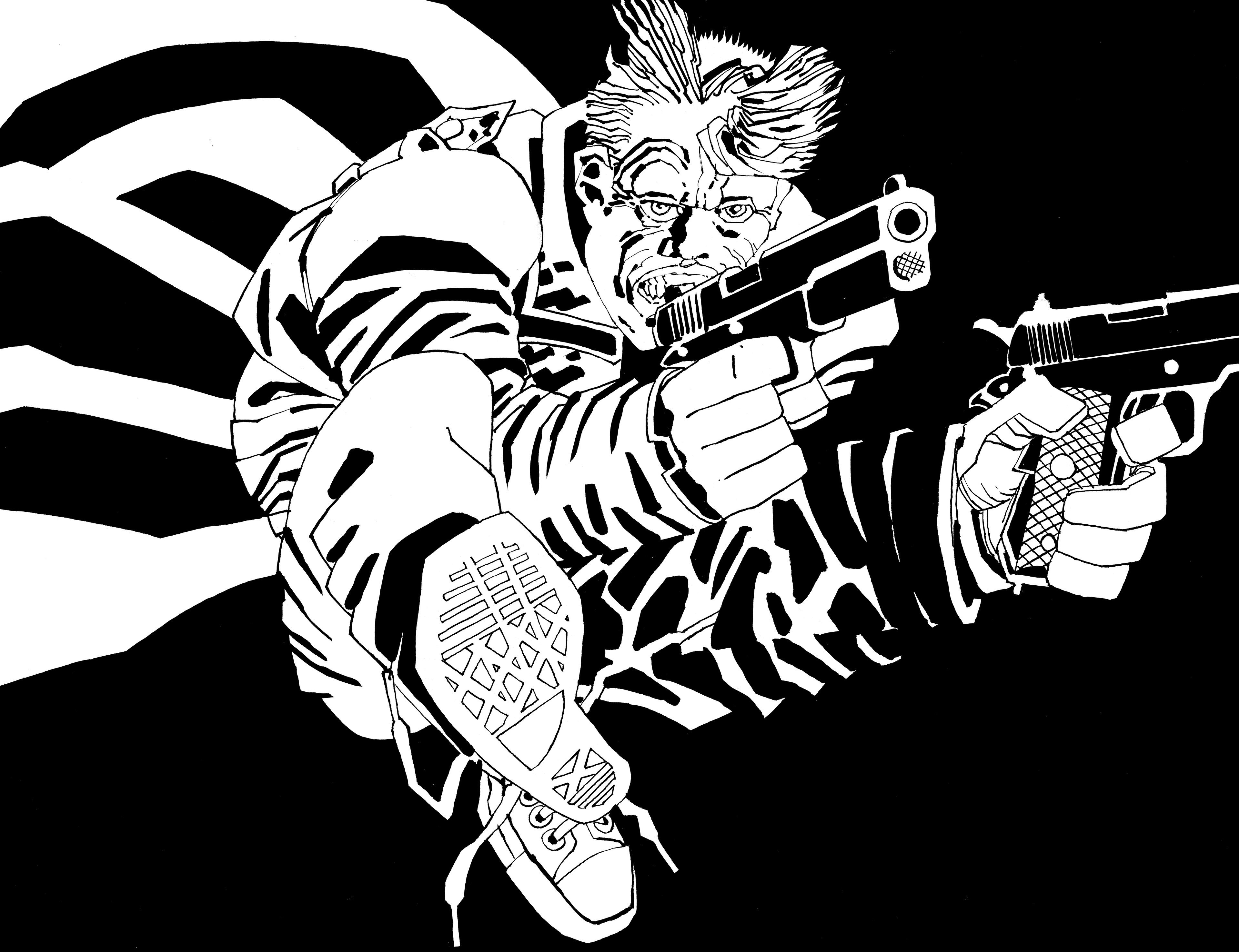 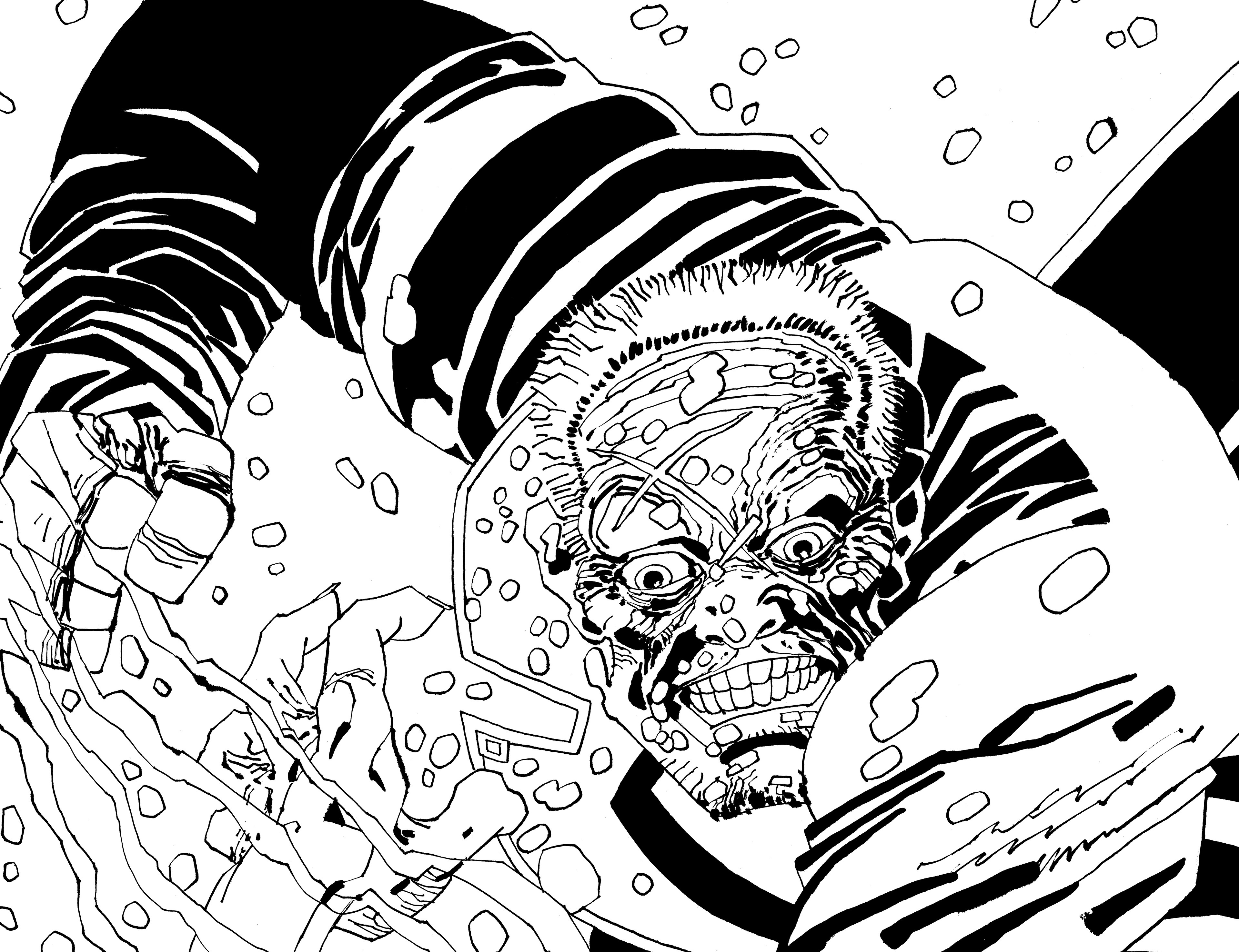 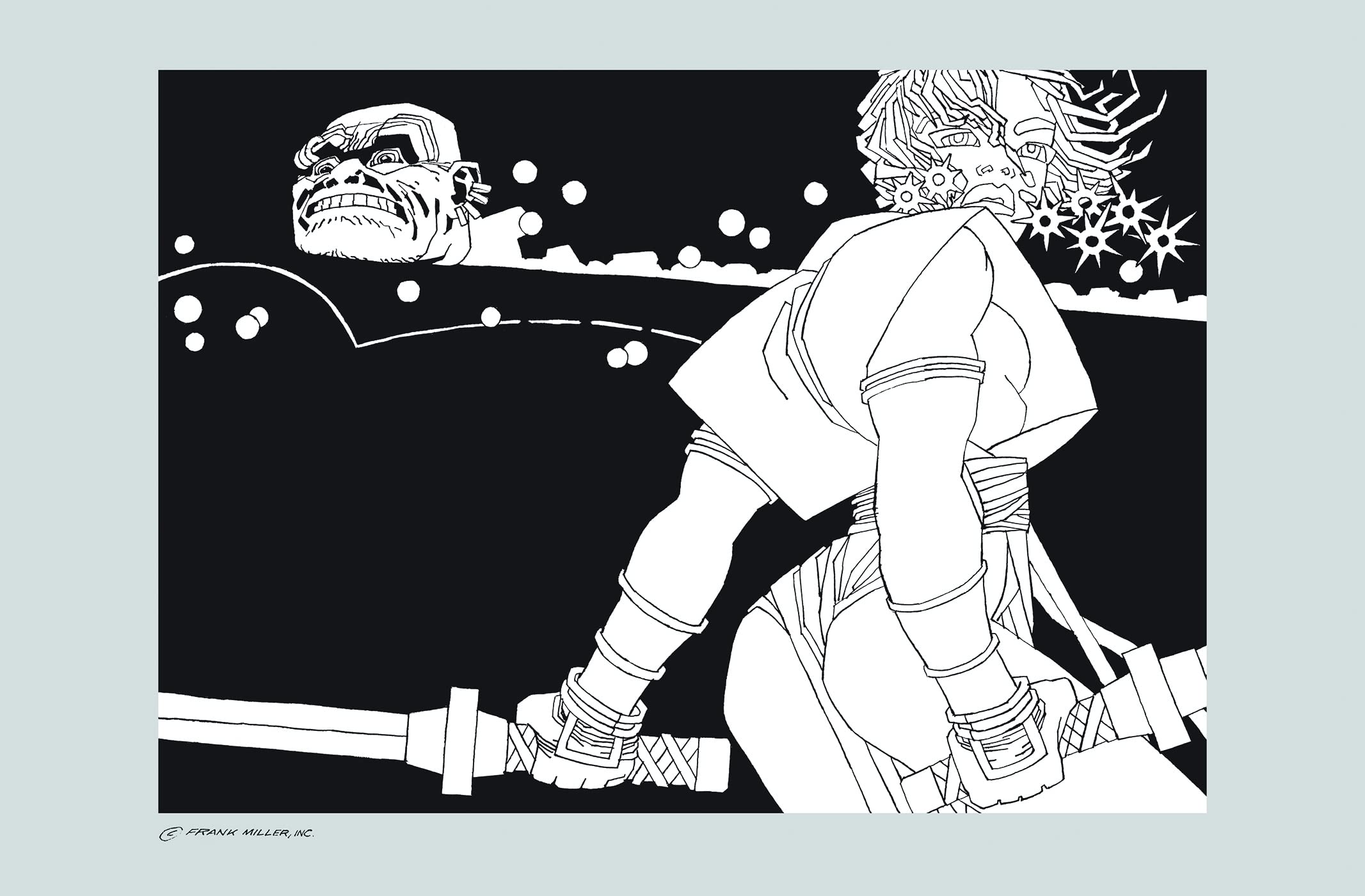 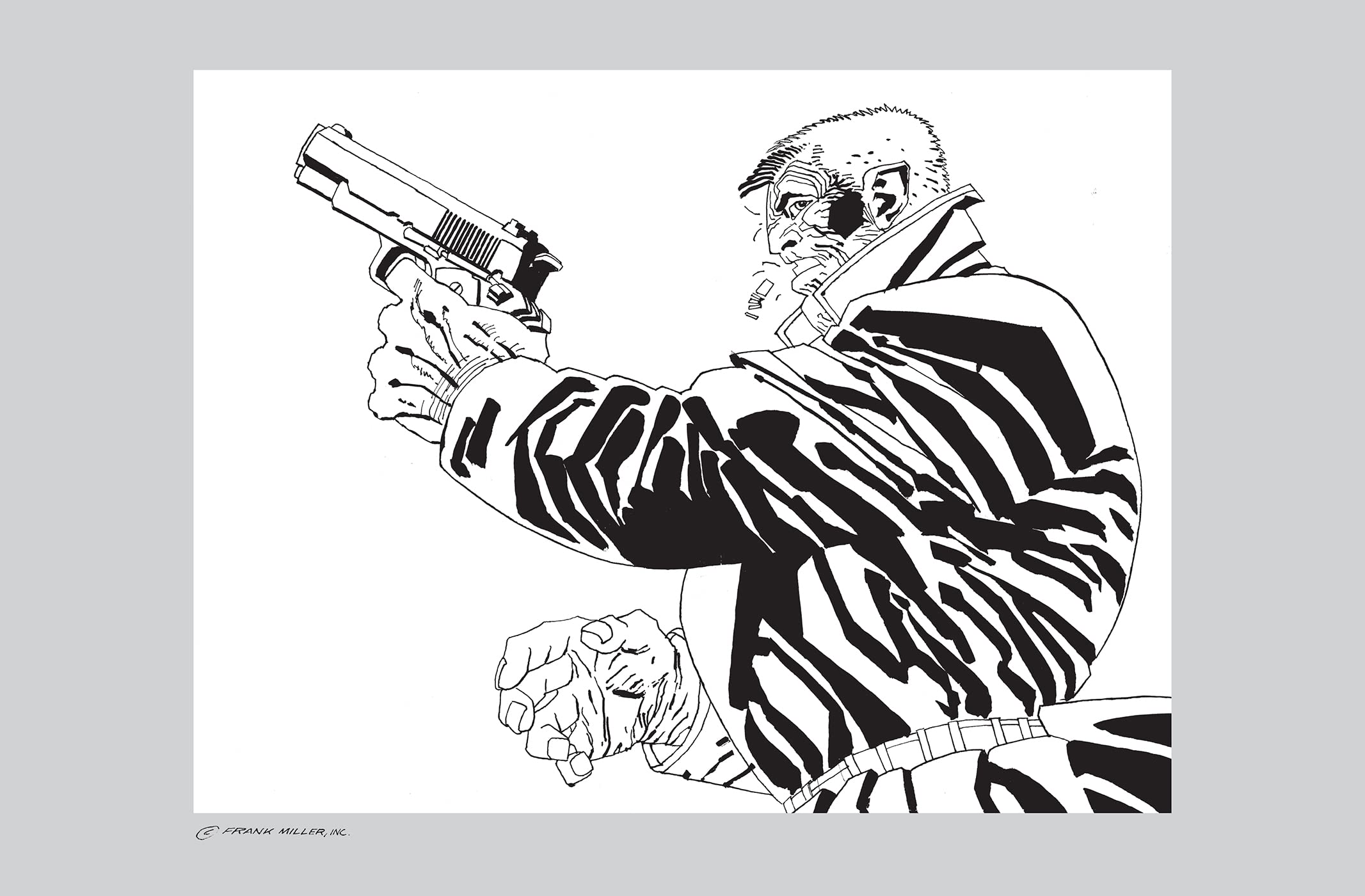 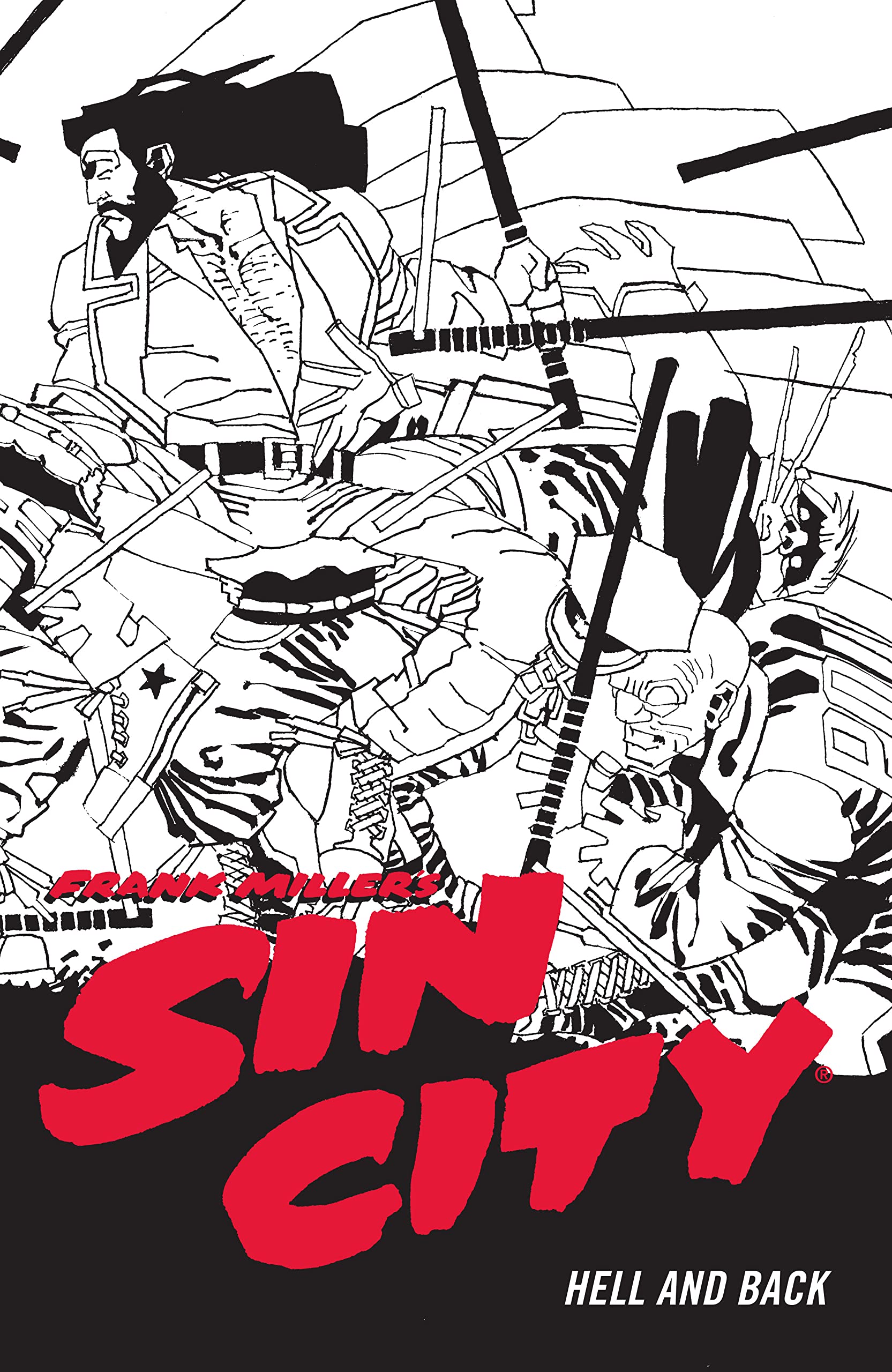