Not sure if anyone else has these figures, but I got one in the mail today (seriously USPS on a Sunday?!?) and thought I'd share. The Apexplorers series is from Winson Studios (same that did Fire Specter), and produced by Hot Toys.

The line is an in-house creation, but there are numerous characters and a basic storyline which you can see here: Winson Creation

But, anyway, like I said I just got the second figure from the series, T-Rex, in today and I am seriously blown away! I really don't think I have any figures that can compare to the quality and detail of this piece. It has some faults, but the outfit and accessories are mind-blowing in person.

Great detail on his gun, has removable clip and the drill is metal...

Also the chest piece and pick axe are die-cast as well.

Notice the weld-lines on the pick-axe... very realistic details.

As a nice touch the packaging designed almost exactly like Sideshow's Star Wars figures. It has the nice opening box, with 2 plastic trays and they box is held closed with magnets... very classy.

As I said, its not perfect and the biggest issue is the articulation. This is huge muscular HT body, much larger than the standard version. And it has much less articulation... it also makes the figure very top heavy which means using a stand (which is not included) is a complete necessity.

However, this figure is still all kinds of awesome and I'm now on the hunt to find the first figure in the series. If anyone's on the fence I suggest jumping on these now!
Last edited: Oct 21, 2007

Pretty sweet man! Not really what I'm into, but I know how you like the simian stuff. The face looks a helluva lot like a character from Samurai Jack.

Damn, thats a nice looking figure J. I love the fur around the head and shoulders.

That does look cool. I love the Firespecter, but if the Apexplorers series all have the more "urban vinyl" looking heads, I'd have to pass.

Any pics online of the first figure in the sereies?

And Dave, the Urban Style is probably the thing a lot of people would take issue with... its similar to the Brothers Workers/Brothersfree figures. I'm not generally a fan of the style myself... but I loves me some Apes. Also these have an interesting sci-fi twist to them. You get some of the story if you check out the website in the first post.

Here's some more images from their debut:

The first figure released is the orange climber on the left:​ 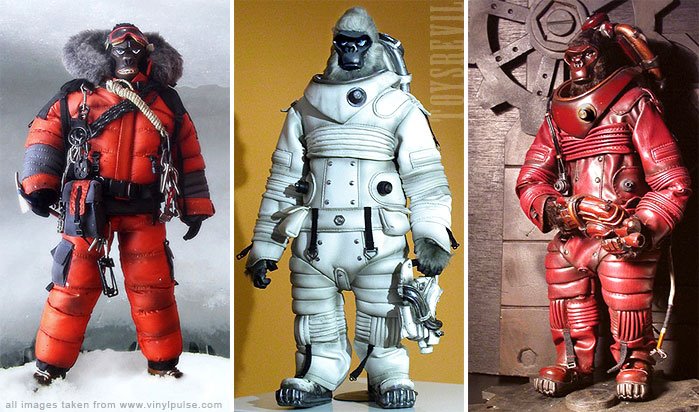 This is the limited ice version of the first figure... sells for about 2X-3X the regular. The accessories are really top notch for these figures​

Some more figures in the series... I think these are all protos; notice T-Rex looks different.​

The white astronaut was a handmade figure that was auctioned off.​

​
I don't know how many of these will actually be made into figures, but I'd definitely buy a Space Suit looking one. And one of the characters from the Winson sit is a giant Bear, who is the villian of the series. I think he'd make a sweetass figure.

Thanks for sharing your pics to us galactiboy :chew

No problem... I was real stoked to get the figure and see how cool it was

Of course I prefer the white ones, which are like $350 each, if you can find them.

I like both colors... but I think it'd be cool to get one of the exclusive versions. Although I don't know if they are only sold to distributors at a higher price, or if there is someway to get them for the same as a regular.

Looks like Sideshow is going to start carrying these:

Apexplorers Preview Now I just hope they get the first figure

Such is Life - Ned Kelly

These Firespecters and Apexplorers do have great detailing, but they are expensively bent. I can understand someone like yourself GB, being sucked into them. You have a simian penchant I find admirable and empathetic to. Still, I'd prefer them if they had a human head to make them identifiable as a 1/6th recreation. Then a bonus Apehead for all the bent coots out here.

Hope they get the first one just to make you one happy monkey.

I wonder what the price tag will be, I was able to get T-Rex for around $140 shipped from Asia... sadly I fear the Sideshow price will be at least $150 if not more.

I just bought both of the exclusives off ebay. G D I, G D I to Hell!

I just bought both of the exclusives off ebay. G D I, G D I to Hell!
Click to expand...

I thought the heads were too urban vinyl for you??

So where's Chewie? C'mon you know he wouldn't be that different to do, right?

galactiboy said:
This is the limited ice version of the first figure... sells for about 2X-3X the regular. The accessories are really top notch for these figures​

This and Dark from Copperhead 18 are pretty much my favorite 1/6th figures.

The amount of accessories that this guy comes with is UNREAL.

I'm thinking about unloading my regular (orange) version and keeping onlye the exclusive... if anyone's interested, please PM me.

These figures are cool. I love the accessories. I won't be ordering these but I did order the Cooperhead 18 Dig figure....I'm now on the look-out for the Dark figure.
You must log in or register to reply here.